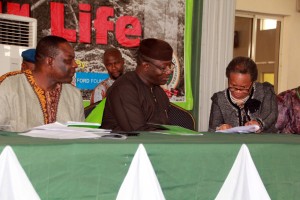 The Governor of Ekiti State, Dr. Kayode Fayemi, yesterday, at the Sixth Annual National Consultation on the Environment, organised by the Environmental Right Action/Friends of the Earth Nigeria (ERA/FoEN), advocated for the proper environmental governance in the country.

Fayemi, who promised that Ekiti State would work assiduously towards achieving this goal, stated that if adequate and sustained efforts were made by the Federal Government and other state governments to initiate laws and policies that protect the environment, the nation would be saved from natural disasters.

He said: “We have a primary responsibility to rescue this country because if we do not rescue this country, we cannot even begin to put our own vision of change. Nigeria is in crisis. When countries are in crisis, coalition building becomes the central focus of the objective.

“We should pursue the environmental agenda. There is also governance to environmental issue. If you do not take government dimension seriously, it will be one step forward and 10 steps backward.

“It is also important to know, not just by isolating the environment in technical terms, but treating its process by engaging all forms of civil societies. Environmental struggles are in various forms. All of them are in different sides of engagements in order to protect our society.

“In our own little way, that is what we are doing here in Ekiti State. So, we must not draw a false dichotomy between the government and civil society because we are in the same struggle to better our society.

“This engagement will take progress and it will take moving into different forms of engagement. That, for me, is doing a lot of work, which ERA has been doing, particularly around coalition building. I have never ceased to tell people that my politics is an extension of my activism; it is not separated from it,” he added.

On his part, the Executive Director of ERA, Dr Godwin Ojo, said deforestation had contributed to 20 per cent of global greenhouse gas emission, just as “carbon stored in trees and soils is released into the atmosphere.”

Ojo also attributed the gully erosion ravaging parts of the country and the deprivation and poverty experienced by communities that depend on forest for survival to deforestation.

In her remark, Professor Margaret Okorodudu-Fubara of the Faculty of Law, Obafemi Awolowo University, Ile-Ife, advocated more enlightenment on the importance of protecting the environment through the mass media.

Okorodudu-Fubara noted that forests served as natural shock absorber, and wind breaker, thereby preventing natural disaster such as typhoons, flooding and rainstorms from having catastrophe effect on the environment.

This articles was first published in The Daily Newswatch