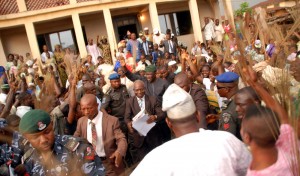 Ekiti State Governor, Dr Kayode Fayemi (Center, wearing Green Cap); with Party faithful and Community Leaders, during a tour of Ayegbaju-Ekiti, ahead of the 2014 appropriation budget.

After three years of hard work and religiously implementing his vision for Ekiti, the drums were rolled out for Governor Kayode Fayemi on October 16, when he marked his three years in the saddle. The event provided an avenue for eminent Nigerians to applaud his transformational programme in Ekiti and also endorse him for another term in office. ABIODUN NEJO reports on the three-week event.

The fanfare that greeted the three-weeklong celebration of the three years in office of Ekiti State governor, Kayode Fayemi ,is not for nothing, but a function of the significance of the historic event. Watchers of events in the state and outside agree that the governor has a cause to celebrate in view of his visible landmark achievements in office within the period, especially in view of the nature of the state and its financial handicap.

For Fayemi, having touched all nooks and crannies of the state with developmental projects and impacted positively on the lives of the people across the 16 local government areas with a view to making poverty history in three years is a cause for celebration.

Having struggled through various courts for an upward of three and half years to reclaim “his stolen mandate,” in the 2007 election, Fayemi was also demonstrating, through the third anniversary which was basically celebrated with projects (commissioning and flag off), that the people should expect more.

With the manner of the celebration marked with inauguration and flag off of projects and the fourth year ushered in with series of projects’ commissioning and take off of execution, is no doubt a loud statement of what is ahead for the people.

But the governor is looking beyond four years in office, as he had declared his intent “to offer himself for the service of the state for another four years.” Therefore, the third anniversary was not only to showcase his achievements to justify the earlier mandate but the need for a renewal of the mandate in another election which is only some months away.

The Information Commissioner, Mr. Tayo Ekundayo, said the state had never had it as good as it is in the present time with all communities having benefited from the execution of one developmental project or the other, adding that the Fayemi administration had lived up to expectations, having executed over 1000 people-oriented projects in the 16 local government areas of the state since inception on October 16, 2010.

Thus, at the mega rally organised by the governor on October 16, the echoes of Fayemi’s achievements, which are visible across the 16 council areas reverberated in the capacity filled Oluyemi Kayode Stadium, venue of the event.

Expectedly, the line up of achievements translated to chants of endorsement of the governor for another term in the forthcoming 2014 governorship election in the state by all shades of opinion, groups and individuals at the wellattended rally.

The various associations including market women, trade associations, youth groups, students, and the leadership of the All Progressives Congress, APC, in the three senatorial districts of the state, among others, hinged their adoption of the governor on the need for the continuation of the accelerated development in the state.

The interim state chairman of the APC, Chief Olajide Awe, in his welcome address, said that what the state had witnessed in the last three years was an indication of the need for continuity of the administration for another term of four years.

Toeing that line, representatives of the party from the three senatorial districts – Mrs Ronke Okusanya (Central), Chief Biodun Akin-Fasae (North) and Mr. Dapo Awojolu, (South), who in their testimonies, reeled out the various projects and programmes completed and ongoing in their areas, said their people had resolved to give the governor yet another chance.

Representatives of the various groups and associations hinged their endorsement of the governor on the physical, social and economic development being witnessed in the state under him, in all the sectors of the economy such as education, health, agriculture, tourism, infrastructure, industrial, human capital, gender equality and empowerment, despite the lean purse of the state.

A former member of the House of Assembly and Chairman, Ekiti State Waste Management Authority, Hon. Adebayo Morakinyo, who gave a breakdown of why Ekiti people were celebrating Governor Fayemi, said: “These things speak for themselves as the story has now changed in the nooks and crannies of the state.

“Ekiti now has motorable roads in all parts. The Operation Renovate All Schools has transformed the physical outlook of all secondary schools, our teachers and students now have laptops just as libraries and science laboratories have been equipped; the administration’s interest in the people’s health as manifest in the free health missions, equipping the hospitals and ongoing renovation of all hospitals in the state.”

Morakinyo said that the governor, who is delivering on his promises, should be allowed to consolidate on the foundations of development he had laid.

While canvassing support for Fayemi, who he said has been committed to the progress of Ekiti State, Chief Babalola, who described anybody at the helms of government and pursuing the vision of prosperity conceived by the founding fathers of the state as his friend; said Fayemi, who is “doing that must be supported.”

The legal luminary said the idea for the creation of the state “was to develop the state and make it the best in Nigeria, and for that purpose Ekiti State is my project. The project was designed to bring prosperity to Ekiti State and whoever is doing that for us is my friend.

“Therefore this is my friend for that purpose. Every reasonable person, every patriotic person, every nationalist must support whoever is developing the state and he (Fayemi) is doing that. Congratulations once more.”

Lauding Fayemi’s Social Security Scheme for the elderly citizens and huge investment in education and human capital development, Governor Oshiomhole said: “I have come here to join the great people of Ekiti to celebrate as they move out from the era of lamentations of poor infrastructure to an era of infrastructure development.

“Fayemi has shown that everything is possible. As we speak, Ekiti is work in progress. It has moved from deficit to positive. If it is not broken, you can’t fix it. When we see what works, we associate with it.”

Governor Aregbesola said Fayemi had justified the confidence reposed in him by the people, adding that the governor’s interest in next year’s gubernatorial election in the state was to consolidate on the development that he had started since 2010.

Former governor of the state, Otunba Adebayo, said since the transformation brought about by the Fayemi administration was visible, it behoves on the people to give him their support to continue beyond 2014, restating his confidence in the ability of the governor to deliver on his promises.

In his address, Fayemi appreciated the people for the show of love and support which encouraged him to achieve the strides recorded by the administration in the last three years.

The governor, however, seized the opportunity to appeal to some aggrieved APC members to return to the fold and join hands with his administration in developing the state, as he stated that members of the opposition parties were already defecting to the ruling party.

Fayemi, however, thanked God for the prevalent peace in the state, recalling the turbulence and instability hitherto experienced which led to emergence of six governors in seven years.

He assured the people: “You have not seen anything yet, we are ready to bring everybody on board. This train of development is on the move and those who fail to join will be left behind at the bus stop.

“We must not relent in the struggle to make life more abundant for our people through the implementation of our eightpoint agenda. It is about empowering our people.”

Insisting that “we are your servants and not your masters,” to ensure that the development which has started and seen by everybody continues, Fayemi said: “I am not tired because there is more to come from the arsenal that has brought this development to Ekiti.”

Fayemi also presented yet another book, entitled: “Regaining the Legacy,” the third since he became governor in 2010, which delves into the governor’s personal account of his intention for Ekiti people, his perceptions about government and his experience.

He said that one of the objectives of publishing the book was to broaden the audience “beyond the catchment of those who were physically present at the various fora where the papers were delivered.”

The governor bared his mind on the various discussions he had had on moving Nigeria forward and urged Nigerians to join hands to succeed and surmount the challenge to having a caring society that prioritised citizens’ prosperity.

He said: “On our part, we are committed to building a society in which no one is left behind because we recognise that as Martin Luther King said, ‘we are caught in an inescapable network of mutuality, tied in a single garment of destiny. Whatever affects one directly, affects all indirectly.”

Fayemi also revealed his dream of a time when future generations would bless “our memories long after we are no more, because with the help of God, we did well to guide our society along the path of peace and sustainable development.”

This article was first published in The National Mirror