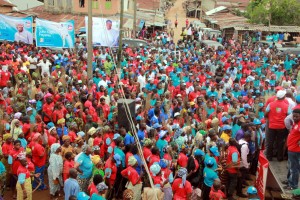 A crowd of supporters that gathered, when the Fayemi Re-Election campaign train toured Iyin-Ekiti, in Irepodun/Ifelodun LGA.

Last Saturday’s election in Ekiti State has produced, expectedly, an outpouring of commentaries, ‘lessons’, to be learnt and of course congratulatory messages to the governor-elect, Mr. Ayodele Fayose, the candidate of the Peoples Democratic Party, who won by a large majority, approaching a landslide.

of the issues begging for explanation as a senior academic colleague put it to me in a post-election conversation connects the Fayose phenomenon, namely why would Ekiti which prides itself the fountain of knowledge prefer Fayose, whose educational qualifications are a matter of controversy, to Fayemi, a scholar and technocrat, as educated as they come?

Nor is that the only puzzle. How do we explain given what we know of the power of incumbency that Fayose even when we take account that he is a former governor gathered almost double the number of votes of the incumbent and won decisively in all 16 local government areas of the state. Before attempting to answer these queries, let us first make the point that politics and governance are not about winning elections alone. Some great statesmen such as Winston Churchill and Abraham Lincoln had lost elections, one of the most dramatic being that of Churchill, Britain’s war-time hero who lost the general election immediately after the Second World War.

In the same vein, Adolf Hitler came to power in Germany by means of an election. Yet, he proved to be one of the world’s most hideous characters. A more contemporary example is that of Silvio Berlusconi until recently Italy’s Prime Minister and one of its longest serving leaders who left office in disgrace accused of bribing public officials, illegally increasing his personal fortune and caught pants down with underage prostitutes. If we see it this way, that is, factor the moral issues involved, then the title of this write-up asking whether Ekiti has truly won the election is pertinent. For example, on Tuesday, The PUNCH quoted the spokesperson for the Economic and Financial Crimes Commission as insisting that the Commission is continuing with the prosecution of the corruption cases involving Fayose. The Peoples Democratic Party strategists may have gained an election by fielding a deeply controversial politician facing criminal charges but may have lost an opportunity to flash the possibility of a morally sanitised polity.

Let us now return to the question raised at the outset as to why Ekiti overwhelmingly opted for Fayose, his antecedents notwithstanding, and repudiated Fayemi. Various explanations have been given with several of them zeroing in on Fayemi’s alleged stepping on the toes of civil servants, teachers and workers through his reformist policies which although were well-meaning failed to reckon with short-term losses which they may occasion. For example, Fayemi’s blocking of the leaking pots in the civil service enabled him to significantly raise the internally generated revenue from about N120m to N600m monthly. However, as the narrative goes, this pitted the civil servants or at any rates the majority of them against the incumbent.

Similarly, the insistence on quality and qualified teachers led to the policy of examination for teachers which, again although right on the money, failed to carry along an important segment of the electorate among whom a whispering campaign went around that once Fayemi was re-elected he would promptly revive the policy which, it is said, was shelved for electoral reasons. While it is doubtful that Fayemi is as naïve as this narrative portrays, he may in fact have alienated a sizable chunk of the Ekiti electorate by failing to reach consensus on well-intended policies. Some others have even alluded to the visibility of the incumbent’s wife, which, it is argued, ran against the grain in a patriarchal society. Such arguments do not specify, however, why other incumbents who committed similar ‘offences’ still managed to win elections.

Before getting to the Fayose phenomenon and his undoubted chemistry with the lower classes, let it be mentioned that while several observers including the United States applaud the election in terms of process and logistics, a veneer of doubt was raised in the last few days concerning the possibility of high-tech electoral manipulation citing as evidence the use of type of ink that cleans very fast and folded ballot papers. It is difficult at this stage to attach serious importance to these allegations given the good track record of Prof. Attahiru Jega, the Independent National Electoral Commission chairman, and the fact that Fayemi, a veteran of trench wars against electoral heist, has not only congratulated the governor-elect but has gone ahead to remark that he would not seek to upturn the verdict in a tribunal.

In the remote possibility, however, that the election was in any sense technologically programmed and went undetected, it would mean that all subsequent elections are in danger of being severely compromised. INEC would be doing the nation a world of good by reassuring doubters of the sanctity of the election by allowing independent observers to carry out verification of the quality of materials used in Ekiti.

Back to Fayose. True, he is credited with infrastructural development such as the building of a trade fair, the dualisation of roads within Ado-Ekiti and the upgrade of several rural roads, his tenure, as is well-known, however, was marred by several controversies, the most serious, perhaps, being the unresolved murders of Tunde Omojola in Ifaki-Ekiti as well as Dr. Ayo Daramola. His admirers insist, however, that despite these dark spots he has a way with the under-privileged who rightly or wrongly see his brand of messiahnist politics as the best for the state.

Let me mention that the high-handedness preceding and accompanying the election featuring the prevention of two governors of the All Progressives Congress from attending a rally in Ado-Ekiti was uncalled for. In the same respect, the use of force to carry out searches on opposition politicians or their sympathisers run contrary to the idea of a level-playing field. True, and as Prof. Niyi Akinnaso argued in The PUNCH, Tuesday, June 24, the intensity of pre-election violence necessitated the deployment of visible detachment of security forces. Intimidation as well as detention of the APC stalwarts on the eve of the election are another matter entirely.

We must warn that it is dangerous to politicise security institutions; or visit terror on citizens going about their lawful duties as seen recently when the media were under siege.

Overzealous party hawks may wish to ponder whether they would rather win at any and every cost or provide an even-handed playing field for all contestants in the interest of the survival of our endangered democracy. It will be unwise to use the skewing of the playing field in Ekiti as a template for the imminent Osun State election or indeed for those of 2015 for the reason that such naked show of force may provoke backlashes and discredit election results.

To be sure, it is hard to discern from the campaign the thrust of Fayose’s governance framework but he can usefully draw on the elaborate manifesto of his two main opponents (Fayemi and Bamidele) in order to usher in the kind of redemptive tempo which Ekiti badly needs.

This article was first published in The Punch on Friday, June 27, 2014