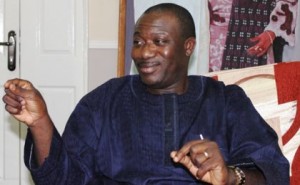 Ordinarily, Saturday polls should be a walkover for the incumbent

It’s been quite some time since I wrote on Ekiti State. Like most other Nigerians, I seemed to have gone to bed, believing that there is no reason to focus on that state, especially since it is now doing well in accordance with the aspirations of its founding fathers.  But this is not the time to be silent on a state renowned for its erudite scholars, at least not with the vultures and predators now lurking around, waiting to reap where they did not sow.

Before I proceed to justify my support for the Kayode Fayemi administration, let me acknowledge the role played by the former governor of the state, Olusegun Oni, in the build-up to the coming June 21 governorship election in the state. Without prejudice to what anybody might say about the point that I want to make concerning Oni, the former governor under the Peoples Democratic Party (PDP), especially now that he has joined the All Progressives Congress (APC), I wish to salute Oni’s courage and forthrightness. I recall that in the course of the struggle by the then Action Congress (AC) to retrieve its stolen mandate from Oni a few years back, I was annoyed when a respected senior colleague told me that he knew Oni very well to be a gentleman.

I had wondered how a gentleman could be comfortable not only keeping a stolen property, but also having the temerity to face the owner in court. With the benefit of hindsight, I now know better. It is not many people who will make the kind of decision that Oni made to join the APC, as he put it, in the interest of Ekiti State. As the former governor rightly said, it is the future of the state that is at stake in the coming governorship election. Oni had the choice of joining forces with those who do not share such an aspiration, and go to the centre for some filthy lucre, even as he knows deep in his heart that the PDP has no chance of winning any free and fair election in the state; he did not consider that option. This is a rarity in our clime. I salute his courage.

Back to Fayemi. It is when orange is not sweet that one will be satisfied sucking just one; but when the oranges are juicy and sweet, one could suck as many as one feels like sucking. I hardly endorse political candidates in my column, whatever the political party they belong to, unless I have sufficient reason to so do. I guess the last time I did that was during the reelection bid of Governor Adams Oshiomhole of Edo State. I also did that for Governor Babatunde Fashola of Lagos State. And for those who might be wondering why it is only governors of the AC or APC that I am mentioning, let me also say that I have had cause to celebrate Governor Rotimi Amaechi of Rivers State in this column way back as three years ago when no one could have thought he would join the APC. All these are acclaimed achievers, politics apart. Again, for those who might want to say whether it is only in the south that we have performers, the answer is no. The point is that before I put pen on paper to say this candidate is good, I must be sure of my facts, and my main criterion is achievement.

It is on that same pedestal that I stand today to commend Fayemi to Ekiti voters. Under normal circumstances, the election should be a walkover for Fayemi. His work should speak for him. But we are not in a country where circumstances are ever normal. Indeed, ours is a country where there is always cause for concern because everything is perpetually under alarm, especially when the matter has to do with elections.  What I am saying is that we are in a place where elections cannot be taken for granted, particularly when the PDP is involved. This is a party that has achieved next-to-nothing even at the centre , yet, it is its president who has been going about marketing the party’s candidates, a president who should lose his deposit even in his own ward! But that is Nigeria for you. And that, precisely, is what anyone who wants to contest the election with Fayemi wants to do: ride on the crest of that ubiquitous ‘federal might’, which in sane climes would have guaranteed nothing but electoral disaster. The people of Ekiti have tasted what life could be like under a PDP government and they have also tasted it under Fayemi and have seen the difference. There is just no basis for comparison. The gap between both is wider than that between apple and oranges.

After the years of the locust, the south west has rediscovered its lost compass; it has woken up from its slumber to remember that the region used to be the pace setter in terms of development in the country. It is instructive that the governors of most states in the region know that they are like cows without tails that are at the mercy of God to ward off flies, unlike their PDP counterparts that look up to the Federal Government for crutches at election time. Even if that explains the efforts being made by governors in the region, particularly in Oyo, Ogun, Osun, Ekiti and Lagos states, including even Edo in the south south to leave enviable legacies that they would be proud of, it is something. What matters is that progress is being made in these states.

I was in Ekiti about five years ago, and I was there again in December, last year. What I saw was amazing. It is unimaginable that anyone would have been able to make such a difference in less than four years, especially when it is realised that the state is not among those awash with petro-dollars. What are we talking about? Is it Fayemi’s social welfare grant of N5,000 to every old citizen in the state? This is commendable in a country where pensioners are left to their own device. And the uncommon transformation of the Ikogosi Warm Springs? Roads, especially intra-state roads in Ekiti are in good condition such that it takes only about one hour to travel from the state capital to anywhere in the state. Fayemi’s covenant with Ekiti people is encapsulated in his eight-point agenda which he has been pursuing diligently.  “My eight-point agenda would be pursued with vigour and life would be more abundant for our people. Governance shall not only be transparent and accountable but the good of our people would be the template,” the governor said during his inauguration in 2010. He has largely kept faith with that promise.

Without doubt, those who chose Ayo Fayose (PDP) to contest against Fayemi either wanted the PDP to fail in the state ab initio or are relying on something else to ‘win’ the election.  This was the same Fayose who established a poultry project worth over N1billion as governor in the state which Chief Olusegun Obasanjo (also a PDP president then) was shocked the usual smell associated with poultries was missing in Fayose’s poultry when he visited the place! As a farmer, Chief Obasanjo should know and he did know that the poultry was a ruse. Moreover, Fayose has all manner of allegations hanging on his neck like a necklace of iron, and it is only a party suffering from an acute shortage of good men that could have fielded such a candidate and expect to win an election.

All said, what people are pleading for is that the June 21 election in Ekiti State be free and fair. No more, no less. And that cannot be a misguided plea. Those who are relying on wars and chariots or crutches from the Federal Government or the Independent National Electoral Commission (INEC) during the election are advised to go dust up their history books. A word is enough for the wise.

This article was first published in The Nation on June 15, 2014.