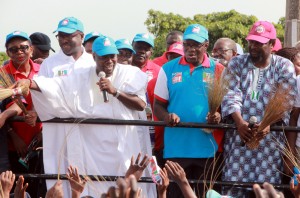 A chieftain of the Peoples Democratic Party in Ekiti State and former Deputy Speaker of the state House of Assembly, Chief Taiwo Olatunbosun, has dumped his former boss, Mr Ayo Fayose and the PDP for the All Progressives Congress (APC), saying that the APC holds a brighter future for the State.

The former Deputy Speaker, Fayose’s right hand man who stood in for the ex-governor when he travelled abroad said his decision to defect from the PDP is borne out of his acknowledgement of Governor Fayemi’s strides in the State.

Olatunbosun who had also served as Commissioner for Information under the Oni-led regime publicly announced his defection from the PDP during Fayemi’s campaign tour of Igbemo, Are, Iworoko and Afao, Fayose’s country home on Friday.

He added that he had considered the exodus of well meaning people across the country from other parties to the APC and decided it was high time he became part of the progressive train.

The former Deputy Speaker disclosed that the mass defection of some of the PDP members in the State is a decision made at Ifaki Ekiti, the country home of former Governor Segun Oni who is also reported to be planning to join the APC soon.

Olatunbosun who stressed that Fayose has nothing good to offer the people of the State other than his “political thuggery” disclosed that the ex-governor who claimed to be a friend of teachers left the State with a debt of over N3 billion emolument for teachers.

He urged Ekiti teachers to review their benefits and compare what they got under Fayose to the many allowances they now get under the Fayemi-led government which is the true friend of teachers.

“I slept and dreamt. I looked at PDP and saw that the party is bleeding and it is sure to die. The party has a virus that is sure to kill it. I looked at where everyone in Igbemo and other parts of Nigeria are going and considered that APC is a party of progress. We have held meetings at Ifaki and decided it is important for me to go where there is light and forsake where there is thuggery. We are tired of a violent man. We are tired of a man who does not have respect for the people. Fayose owed teachers emoluments of about N3billion so it is Fayose that should not be supported by teachers instead of the rumour that teachers don’t like the governor who has benefitted more”, Olatunbosun said.

At Afao, Fayose’s country home, the palace of the Alafao was completely shut and the monarch was unable to attend to Governor Fayemi’s campaign train.

Some community members who spoke to journalists in the town disclosed that the closure of the palace was ordered by the ex-governor who allegedly threatened to beat up the monarch should he receive Fayemi at the palace.

Fayemi however held a peaceful campaign in the town and warned politicians against denying people of their right to association.

The Governor stated that he doesn’t have any enemy in the town, saying that everyone has a right to contest an election but should allow the people make a choice on volition.

Fayemi said anyone can claim to see visions and have dreams but they must also conduct themselves with decency to show people that their visions are given by God.

The Governor added that the people of Afao have been enjoying dividends of democracy which his administration has been distributing in the last three years with the reconstruction of Ado-Afao road which was once a den of thieves and was impassable for its deplorable state.

“We have done our duty to Afao. Our government does not hate anyone. As long as you are in Ekiti, our party is for you and will do everything to better your lot. We don’t have enemy in this town. Everyone has a right to contest. Anyone can dream and even see visions but we must always do everything in decency and not hatred and brigandage. We must allow the people vote for the people of their choice”, Fayemi said.

At Are Ekiti and Iworoko, Governor Fayemi was received by a mammoth crowd who shouted the Governor’s re-election slogan “kodurosoke”, meaning let him remain at the top.

On the Governor’s campaign entourage were the former Governor of the State and Vice Chairman, SouthWest of the APC, Otunba Niyi Adebayo, Senator Babafemi Ojudu, Apc interim Chairman in the State, Chief Jide Awe, member of the State Executive council from Irepodun Ifelodun local government and Party faithful.