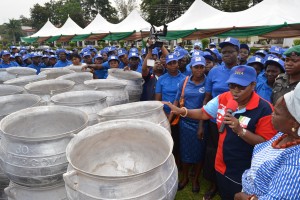 R-L: President, Ekiti State Food Vendors Association; Chief Victoria Oladimeji; Wife of the Governor, Erelu Bisi Fayemi; and others when the governor's wife presented empowerment materials to members of the association, in Ado-Ekiti.

Wife of Ekiti State Governor, Erelu Bisi Fayemi, has distributed multi-million naira worth of cooking utensils to the state chapter of the Food Vendors Association in continuation of her empowerment initiatives.
The governor’s wife also made cash donation to members of the association at the event, which took place on Government House ground, Ado-Ekiti, on Monday.
Applauding the patience of the association, she said that the donation was earlier rescheduled due to other exigencies that required equal attention across the state.
She clarified that the donation was not particularly timed to coincide with the June 21 governorship election campaign, but was a continuation of her empowerment initiatives that started more than three years ago.
Erelu Fayemi said, “This empowerment is not because of the coming election. I need to emphasize this before our opponents go to town with lies. My empowerment initiatives started more than three years ago and it will continue.
“I thank God for making this possible today. Just as I have been empowering other women groups across the state, it’s the turn of the food vendors today. Women empowerment is a cardinal agenda of the Dr. Kayode Fayemi-led administration.”
The First Lady used the opportunity to solicit support of members of the association for the governor’s second term ambition, stressing that the June 21 election transcended a mere contest between the governor and other candidates.
According to her, the coming election was about peace, stability, development and continued prosperity of the state, which she said her husband epitomized.
Having turned the fortunes of the state around in all sectors within a short period of time, she said that her husband deserved to be re-elected in order to consolidate on the achievements.
She said, “This election is about light and darkness. You can’t compare the two. Fayemi has brought light into Ekiti and we will never go back to darkness. Ekiti will never move one step forward and ten steps backward. Forward ever, backward never.
“If we want good future for our children, Fayemi is the man and June 21 governorship election is the answer. Our vote is our power; let us use it to bring Fayemi back. This election is not for those throwing money at our people as if we are beggars.
“I pray that God should open the eyes of those yet to see the network of good roads and street lights in Ekiti. God should open the eyes of those yet to see the elderly benefitting from the social security scheme. He should open the eyes of those yet to see the wonders Dr. Fayemi is performing in Ekiti.
“If you want us to continue to enjoy progress, peace, stability and all-round development in Ekiti State, this is the administration to support. Dr. Fayemi is the man to vote in the June 21 election.”
She urged the food vendors to act as good ambassadors of the state by propagating the good deeds of the Fayemi-led administration to their customers, neighbours, kits and kins.
The elated President of the association, Chief Victoria Oladimeji, commended what she called the unprecedented gesture of the governor’s wife, stressing that the association had never had it so good.
She pledged the support of the members of the association for the second term ambition of Fayemi, whom she described as a promise keeper.
Oladimeji said, “I must salute the doggedness of Erelu Bisi Fayemi, who has put smiles of the faces of Ekiti women with different laudable empowerment schemes. I’m elated today, because it’s now the turn of my members.
“No government or wife of governor has offered any form of assistance to food vendors. God is happy with you Erelu. The progenitors are praying for you. Thank you for elevating Ekiti women. We shall repay your husband with our votes and it’s going to be total.”