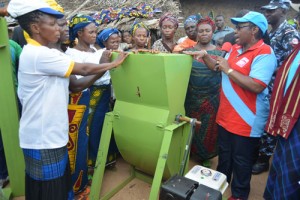 Wife of Ekiti State Governor, Erelu Bisi Fayemi (right) presenting garri processing machine to residents of Lawrence Camp, Ekiti South West Local Government, during her empowerment visit to the hamlet as part of her farmsteads empowerment programme across the state.

Wife of Ekiti State Governor, Erelu Bisi Fayemi, has begun distribution of kerosene, garri and palm oil processing machines to farmsteads across the 16 Local Governments of the state.

The gesture is in continuation of her empowerment schemes, which had seen her touring the state on different occasions since her husband, Dr. Kayode Fayemi, became the governor of the state.

As at Wednesday, the First Lady had visited twelve locations, which were the converging points of hamlets in Ekiti South-West, Ijero and Oye Local Governments.

Among items distributed were cooking stoves, treated mosquito nets and other empowerment materials.

The visit presented a veritable platform for the governor’s wife to rally support for her husband’s second term ambition in the June 21 governorship election.

Having kept faith with his promises to the people so far, she said that the governor deserves another four-year tenure to enable him to extend the dividend of democracy to the nooks and crannies of the state.

At each stop, the governor’s wife urged the women to form themselves into cooperative societies to benefit from the Ekiti Development Foundation’s soft loans.

The women, who are predominantly farmers trooped out in their hundreds to give the First Lady rousing welcome, singing and holding brooms, the symbol of the ruling All Progressives Congress.

Each hamlet leaders seized the opportunity of the governor’s wife’s visit to present catalogue of demands, which included request for grading of roads, provision of potable water and electricity.

The Baale of Bolorunduro, Alhaji Ganiyu Oyebode, thanked the government for empowering the women at the grassroots and assured the governor’s wife of his people’s support for the governor in the coming poll.

Responding, the governor’s wife urged the villagers to rest assured of her husband’s commitment to taking the state to greater heights if given another opportunity.

She said, “Governor Fayemi has delivered on all his promises to the people of the state. My visit is to demonstrate to you that the government is also concerned about the development of rural areas.

“Any government with the fear of God, with wisdom and compassion will not wait for the people to demand for basic amenities before making them available. Your demands will be attended to.

“The only thing I demand of you is to ensure that you cast your vote for my husband on June 21. He is not God, but he does not promise what he cannot deliver.”

She advised the villagers against voting for candidates with sugar-coated mouth who will only come and deceive them with empty promises.

The governor’s wife said that the remarkable difference between the governor and other governorship candidates was that Fayemi’s achievements were visible and verifiable.

The First Lady said, “Others are coming to tell you what they will do. If you scrutinize their antecedents you will know that you cannot trust them. My husband has completed many projects across the state.

“He is the only person with the requisite experience and pedigree capable of further turning around the fortunes of Ekiti. We no longer want a government of one day, one commotion and violence.”

Erelu Fayemi warned the people against the activities of poll-riggers who would come to deceive them and attempt to purchase their voters cards.

She reminded them of the social security scheme of the present administration which majority of the old people have been enjoying urging those who have not benefitted to register immediately so that they would start collecting theirs.