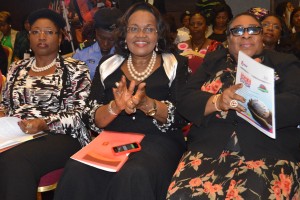 Wife of Ekiti State Governor, Erelu Bisi Fayemi, has called for legislative framework that will give women necessary leverage in their fight against gender injustices and all forms of abuses.

Besides, she urged women to form movements against all forms of abuses aimed at women and the girl child instead of bemoaning their fate.

The governor’s wife was the keynote speaker at the 2014 Women Directors’ Conference organised by Institute of Directors, in Lagos, on Tuesday.

The theme of the conference was ‘Women as leaders: Discovering authentic leadership.”

The Ekiti First Lady advised women to start making commitments towards championing women’s rights by using their skills and opportunities to support others.

She said, “Nigerian women will continue to march on one spot if we do not ensure that there are constitutional guarantees for effective representation and participation, specifically through affirmative action and quotas.

“We should always remember that in spite of the many constitutional guarantees of equality of citizens; there is no level playing field out there.

“Without concrete and proactive measures such as affirmative action and quotas, we will continue to see dismal statistics of women in business, politics and decision-making.

“We need strong movements to help fight gender injustices and fly flags of zero tolerance of all forms of abuses.”

She challenged women holding positions of influence in business, politics or public life to use such positions to advance policies and laws that would guarantee women’s wellbeing and provide for their needs.

She encouraged more women to vie for political space and advised those being hampered by fund to seek assistance from the Nigerian Women’s Trust Fund, which she chairs.

For those ready to take up the gauntlet, she counseled them to ensure that they entered the race with authentic agenda by looking in new direction for the kind of leadership that would truly serve the people.

In a welcome address, the President and Chairman of Council, IoD, Nigeria, Mrs. Eniola Fadayomi, said women deserve 50 per cent position in every sphere of endeavor.

She based her position on what she called the superior numerical strength of the country’s women, as well as their relevance to national politics and economy.

Fadayomi used the platform to encourage women to work together, network and work against all barriers that stand against their attaining leadership potential.

Goodwill messages were delivered by the Wife of the Vice President, Hajiya Amina Namadi Sambo and the Minister for Women Affairs and Social Development, Hajia Zainab Maina, who were represented at the occasion.