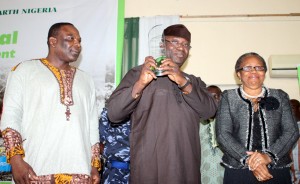 Ekiti State Governor, Dr Kayode Fayemi, has been urged to champion the campaign for a national social security law that will cater for the needy in the country, having successfully implemented a social security scheme for the elderly citizens in his state.
A non-governmental Nigerian advocacy organization, Environmental Rights Action/ Friends of Earth Nigeria (ERA/FoEN), made the call in Ado-Ekiti on Thursday, at the opening of its 6th annual National Consultation on Environment, where it conferred its maiden Social Security and Environmental Protection award on Governor  Fayemi in recognition of his poverty reduction strategy through the implementation of the social security scheme for Ekiti elderlycitizens.

ERA/FoEN, which earlier in the year had proposed a National Basic Income Scheme (NaBIS) as a social security of about N10,000 payable to all Nigerians who are unemployed, stressed that a proper implementation of a national social security law, will help  uphold human dignity, reduce poverty, unlock creative potentials for the generation of employment opportunities and reduce the prevalence of crime in the country.
The Ekiti State Social Security  Scheme, which has since been introduced in three other states in Nigeria, already has 25,000 elderly citizens benefiting from the monthly stipends of N5,000.
The organisation therefore urged Governor Fayemi to take a leading role in the campaign, having demonstrated his commitment to poverty eradication through the Ekiti State social security scheme for the elderly citizens.

Executive Director, ERA/FoEN, Dr Godwin Uyi Ojo, during the presentation said the premiere award of recognition for Social Security, Livelihoods and Environmental Protection, presented to Governor Fayemi, was in recognition of the impact of social security in poverty reduction in Ekiti State. He said the social security scheme has been part of the organisation’s major campaigns in its 20 years existence.

The ERA boss said :  “Early in the year, we proposed a National Basic Income Scheme (NaBIS) as a social security of about N10,000 and to be paid to all Nigerians who are unemployed. The NaBIS will uphold human dignity, reduce poverty, unlock creative potentials for the generation of employment opportunities and reduce the prevalence of crime in our society.

Dr Ojo said the organisation found in Governor  Fayemi some level of fulfillment of these aspirations in his empowerment of Community Development Associations (CDAs), and his innovative monthly social security stipends to the elderly senior citizens who are 65 years and above.  “Herein, the aspirations of the ERA/FoEN and that of the Comrade Governor are well aligned. Therefore, this award for excellence is not a political one.

Praising the Ekiti State government’s social security initiative, the ERA/FoEN boss said it was note worthy that despite being classified as one of the states with low revenue allocation from the federation account, Ekiti State Governor still blazed the trail in social security delivery, which other governors are now replicating.

“Through this medium, while we congratulate the Governor and ask him to do more, the ERA/FoEN and its allies wish to enlist the action governor to be a part of the launching of NaBIS at the national level come 2014”, he said.

Receiving the award, Governor Fayemi said he could have turned down the award because he is “suspicious of awards” from organizations who offer frivolous recognitions, but chose to collect it in honour of the elderly citizens whose welfare is of paramount concern to his administration.
The Governor while dedicating the award to the aged citizens, explained that many of the beneficiaries come out during the ongoing town hall meetings to tell him how their lives have been preserved by the monthly stipend, which now has a legal backing, following the passage of the State’s Social Security Benefit  law.

He added that some of the elders even engage in N1,000 monthly contribution after expending some on their well being. The scheme, it could be recalled, is complemented by free health programme for the elderly citizens.

Governor Fayemi commended the organization for joining him in canvassing for a national social security benefit for all Nigerians, saying that all elderly citizens in the country deserve to benefit from the scheme.