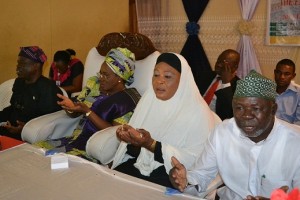 With a charge from Governor Kayode Fayemi to be good ambassadors of Ekiti State, all 246 intending pilgrims left Ado-Ekiti, the state capital for Ilorin, Kwara State, enroute Saudi Arabia.

The pilgrims were reminded by the governor represented by his deputy, Prof Modupe Adelabu that pilgrimage to the holy cities of Mecca and Medina is for spiritual rejuvenation and not for business transactions.

It was at a ceremony organized at the Cultural Centre by the State Muslim Pilgrims Welfare Board for those on holy pilgrimage. They were billed to be airlifted from Ilorin International Airport last night.

The governor urged the pilgrims to avoid drug peddling and to shun all acts that could bring the name of the state to disrepute.

His words: “You must as matter of necessity, strictly comply with Saudi Arabia laws. You should prove that Ekitis are dignified and law-abiding people, who hate being embarrassed wherever they are – either at home or abroad.

“Do not carry forbidden drugs or any contraband that could lead to deportation, imprisonment and even death penalty. Follow the instructions of Board officials who have made adequate arrangements for your welfare and are better informed about the rules the Nigerian and Saudi authorities regarding hajj operations.”

According to him, competent guides with vast knowledge about the Saudi terrain have been engaged to put the pilgrims through during their sojourn in Saudi Arabia.

“I have been equally informed that law-abiding pilgrims are treated by the government of Saudi Arabia as guests of Allah and that whoever violates the laws will be treated as a common criminal. Please make a good choice for you to enjoy the wonderful hospitality of your host country,” the governor said.

The wife of the governor, Bisi, who gave hijab branded with Ekiti State logo to all women on pilgrimage, said the gesture was to create a unique identity for pilgrims from the Land of Honour of State. She was represented by Mrs Modupe Owolabi.

Also speaking, the Secretary to the State Government (SSG), Alhaji Abdul-Ganiyu Owolabi, urged the pilgrims to be good ambassadors, describing pilgrimage as the fifth pillar of Islam.

The SSG urged them to spare some moments for the state government.

He said: “The best support you can give to the administration of Dr John Kayode Fayemi is committing it into God’s hands during your spiritual rejuvenation in Saudi Arabia.”

The Chairman of the state Muslim Pilgrims Welfare Board, Alhaji Ganiyu Olowoyo and the Amir Hajj for 2013, Alhaji Afolabi Ogunlayi were among those who bade farewell to the pilgrims yesterday.

Ogunlayi assured that this year’s pilgrims would be the state’s best-ever.