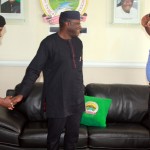 Ekiti State Governor, Dr. Kayode Fayemi, has said that his administration would not relent in its effort at giving the state police command maximum support to maintain peace and reduce crime to the barest minimum.

Fayemi made the pledge on Tuesday while receiving the new Commissioner of Police in charge of the state command, Mr. Taiwo Lakanu, who paid him a courtesy visit in his office in Ado-Ekiti.

He promised to work with Lakanu to ensure success in his new capacity as the number one police officer in the state saying Lakanu’s track record and experience will benefit Ekiti people immensely in the area of security management.

Fayemi advised the police chief to work together with other sister security agencies in the state and also collaborate with the Office of the Attorney General to facilitate quick dispensation of justice.

The Governor revealed that Lakanu would be the sixth Commissioner of Police he would work with since coming to office in October 2010
noting that Ekiti State has been lucky to have competent officers to head the command.

Fayemi said, “Even though the crime rate in Ekiti State is the lowest, we believe that you will build more on it. You are the sixth CP we will have in the last four years.

“I hope that you will build on the record that has made Ekiti State enviable in Nigeria as the most peaceful state and I want to assure you that we will not relent in our support for the command.

“Our people are peaceful even though they might be difficult when it comes to defending their rights. This is a peaceful community but we will support you.

“Tempers might flare but when issues are handled in professional manner, I believe there will be no problem.”

Earlier in his remarks, Lakanu disclosed that he had been briefed on the numerous assistance rendered by the state government to the Police most especially in the area of logistics.

Describing Ekiti as the first duty post where he would assume headship of a state command, Lakanu commended the Governor for the support enjoyed by the police in the state to fulfil their statutory responsibilities.

Lakanu added that he had already hit the ground running by holding series of meetings with officers and men of the command to fashion out to fashion out strategies of tackling challenges inhibiting crime prevention.

The new police commissioner was accompanied to the Governor’s Office by other senior officers of the state command.