Featured, Features, NewsFayemi Reiterates Commitment To Catering For The Needy

Fayemi Reiterates Commitment To Catering For The Needy 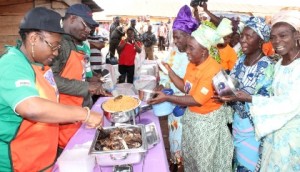 Ekiti State Governor, Dr Kayode Fayemi has reiterated the commitment of his administration to giving succor to the less privileged and other vulnerable sectors of the society so that life could be relatively comfortable for them.

The Governor restated this at Itapa Ekiti while serving hot meals to hundreds of aged citizens in the Soup kitchen initiative of the Ekiti Development Foundation (EDF) initiated by the governor’s wife, Erelu Bisi Fayemi.

Dr. Fayemi who alongside his wife displayed humility by personally serving the elderly citizens stated that the initiative was aimed at protecting the weak and the vulnerable who cannot fend for themselves as a result of old age or lack.

“We are a social democratic government that knows that not all of us are privileged to be able to afford 3 square meals a day. We have a duty and responsibility to the weak and the vulnerable in the state to lift them up to a level where they are relatively comfortable so that the rest of us will be better protected if we protect the weak and vulnerable among us. That’s the rationale behind it. The food bank is just a segment of an overarching holistic strategy to protect the weak and vulnerable”, he said.

The Governor added that aside the raw and cooked food given to the elderly, his administration’s social security scheme for the elderly which is currently being imitated by Bayelsa, Osun, and Anambra States and the free health programme are all put in place as safety nets to ensure that Ekiti has not only a healthy but also a wealthy population.

Fayemi however promised to give necessary supports to the Ekiti Food Bank to ensure that all target citizens across the 16 council areas of the state get adequate attention before the end of year 2014.

In her remarks, the initiator of Ekiti Development Foundation, Erelu Fayemi explained that the Soup Kitchen which is a component of the Food Bank provides hot meals thrice daily to the aged, orphans, widows, vulnerable children and persons living with HIV/AIDS and currently has over 5,000 beneficiaries.

The governor’s wife who added that the initiative is already getting more sponsors from among the political class in the State called on all well-to-do Ekiti indigenes to buy into the initiative so that poverty can be banished from the State.

At present, there are 12 Soup Kitchens in the State and the EDF is planning on expanding the kitchens so that all parts of the State can have at least one kitchen to cater for the needy.

In another development, Governor Fayemi has presented three utility vehicles to the National Union of Road Transport Workers (NURTW), Road Transport Employees Association of Nigeria (RTEAN) and Taxi Cooperatives so as to carry out their administrative duties.

The Governor said this is in fulfilment of the promise he made to the Transport Unions when they solicited his support for them to have utility vehicle for their unions.

Speaking at the presentation of the IVM Pick-ups in Ado Ekiti, the Chairman of the RTEAN, Mr Joseph Olanbiwonu expressed surprise at the approval given their request by the Governor and assured that the Unions would give the present administration the needed support for the success of the administration.

At the presentation were the Deputy Governor, Prof. Modupe Adelabu, some members of the State Executive Council and drivers from the three transport unions.