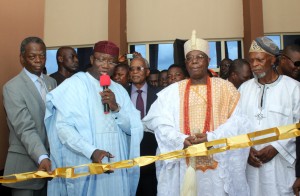 Ekiti state Governor, Dr Kayode Fayemi has reiterated the commitment of his administration to making Ekiti State University a world-class institution by providing logistics and infrastructure that will make the institution achieve excellence.

The Governor made this known at the weekend at the 19th convocation ceremony of the institution that the huge investment of government in the school is aimed at ensuring that the products of the institution can compare favorably with their counterparts from across the globe.

Dr Fayemi who is set to join the newly established Institute of Peace and Security Studies at the Varsity as a lecturer inaugurated the College of Medicine library which is reputed as one of the best in Nigeria and flagged off the construction of two internal roads within the institution.

He opined that the library would not only help fast tracking the full accreditation of the college but also make the medical students the best among equal.

While assuring that the state government will not leave any stone unturned to ensure that the University becomes a reference point, the Governor recalled that the Executive Secretary  of the Nigerian Universities Commission (NUC) Prof. Julius Okojie had described EKSU as a model for States which have more than one university and are incapable of financing them; saying that the merger of the three varsities in the State has enabled the single new one get attention for functionality.

Governor Fayemi said the efforts of his administration in revamping the varsity is paying off now as Law graduates of the State University emerged best students in the just concluded examinations at the Nigerian Law school.

He added that the ongoing laying of fibre optic cable in the State capital is one of the plans of government to make the university a centre for ICT-based examinations and aptitude tests for organizations.

Meanwhile students unionism has returned to the University even as Governor Fayemi also donated an 18-seater bus to the new leadership of the Students Union Government led by Temitope Ibitola.

While conducting the Governor round the completed projects, the Vice Chancellor of the University, Prof. Patrick Aina commended Fayemi for the support given the institution; saying that the institution for the first time since its inception in 1982 now gets a capital grant and a N50 Million increase in its subvention.

Aina specifically commended Fayemi for the global connection the institution is getting for a partnership with some Universities in South Africa, saying that this will facilitate exchange programmes that will build up the capacity of staff and students of Ekiti State university.

The Vice Chancellor also invited Fayemi to pick up a teaching job at the school’s Institute of Peace and Security Studies which will soon commence academic activities.

The pre-convocation programme was attended by the Ewi of Ado Ekiti, Oba Adeyemo Adejugbe, the Commissioner for Education, Science and Technology, Mr Kehinde Ojo, academics including the renown Professor of History, Ishola Olomola, and a crowd of students who sang various songs of appreciation and support for the governor’s re-election.

The students carried campaign posters with the picture of Governor Fayemi and his achievements in the university.

Some Academics who spoke to journalists after the programme said though they are not politicians, they have clearly seen that the governor has good intention for the institution and should be allowed to continue his tenure beyond 2014 so as to complete the repositioning of the University which has witnessed a lot of rots under previous administrations.