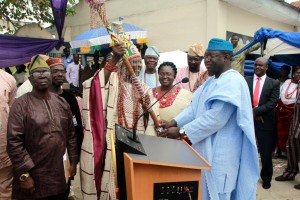 Ekiti State Governor, Dr Kayode Fayemi has presented the staff of office and instrument of appointment to Alara of Aramoko Ekiti, Oba Adegoke Olu Adeyemi, with a charge to traditional rulers in the state  to work harmoniously with the community members in order to bring about peace and enviable development in their various towns.

Presenting the staff of office at a colourful ceremony at the palace ground, Aramoko Ekiti on Saturday, the Governor said Oba Adeyemi possessed the wherewithal to lead the people of the community on the path of development and  improvement of their welfare, urging the people to also embrace the spirit of oneness and sincerity of purpose in order to record higher level of peace and progress.

Reiterating that his administration would never influence the selection of any traditional ruler, Dr Fayemi stated that the freedom of choice in accordance with the extant rule and chieftaincy declaration are always left with the people.

”Let me say that I am not oblivious of the fact that the struggle for the stool involved some other contenders as it is usually the situation in other towns. I consider this a healthy competition among the qualified individuals of blue blood extraction divinely instituted to produce the ordained rulers. However, I regard the outcome of the competition as no victor, no vanguished”, he said.

The Governor who commended traditional rulers in the state for their support for the State Government said the administration is making life more comfortable for the rulers in recognition of their unique roles in the state.

He highlighted the free health scheme tagged “Ilera Laafin” which the state government took to the palaces and the recent distribution of brand new vehicles aimed at easing their transportation as part of the welfare packages which the administration had provided them.

Fayemi also assured the citizenry that the meagre resources that accrue to the state would be judiciously expended on the people’s welfare as enunciated in the 8-point agenda of the administration; saying that his administration’s approach to development is all-inclusive and the contributions of individuals and groups would be appreciated.

The Governor also implored the traditional rulers to support government in reviving the moral values as an integral part of the Ekiti culture “which we used to hold in high esteem in the past which has been shamelessly eroded by the supposed civilization and foreign culture”.

He said the moral values as well as traditional ethos had over the years given the state a unique identity as people of honour.

In his remarks, Oba Adeyemi pledged the support of the entire people of Aramoko for the administration, stressing that the town had witnessed a good measure of development under the Fayemi administration.

He cited the recent release of the sum of  N7.5million by the state government for the completion of the Alara palace under the community  empowerment programme, as one major step that is helping the town realise its dream of having a modern palace.

The traditional ruler who was a retired Permanent Secretary lauded the efforts of the Fayemi-led administration towards ensuring all-round rapid transformation of all communities in the state through the Community Empowerment programme; saying that this has helped many communities in actualizing their long-term abandoned projects.

He also called on the other 11 contenders to join him in moving the Aramoko community to an enviable height.

Oba Adeyemi specifically thanked Fayemi for reviewing the pension of some retired permanent secretaries who were earning below the old minimum wage of N8000; saying that the gesture had enabled many of them to meet many personal and family obligations.

At the event were the Special Adviser to the Governor on Chieftaincy Affairs, Chief Aderemi Ajayi, the caretaker Chairman of Ekiti West Local Government, Pastor Ropo Famubode and his wife, Ebun Famubode, member Ekiti State House of Assembly, Hon Gbenga Odebunmi, a former member of the House of Representatives, Hon Kehinde Odebunmi.

Royal fathers who graced the occasion included the immediate past Chairman of Council of traditional rulers in the state and Owa Ooye of Okemesi, Oba Gbadebo Adedeji, the Alaaye of Efon, Oba Emmanuel Aladejare, the Oloye of Oye Ekiti, Oba Ademola Ademolaju, Elekole of Ikole, Oba Ajibade Fasiku, Alawe of Ilawe, Oba Ajibade Alabi, and the Olojudo of Ido-le-Ile Ekiti, Oba Aderemi Obaleye among others.