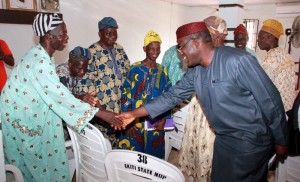 Ekiti State Governor, Dr Kayode Fayemi (Right), addressing a cross section of Pensioners shortly after an interactive session with them, at their secretariat, in Ado-Ekiti.

The nine months backlog of the pension which originally covers 13 months is to be cleared in four instalments after the Fayemi-led government had a few months ago effected payment  of the first four months.

Governor Fayemi who gave this assurance during a meeting with Pensioners in Ado- Ekiti on Wednesday also disclosed that government had this month earmarked N150 million to pay gratuity despite the recent shortfalls in the federal allocations to the state.

The Governor stated that the burden of gratuity owed the retirees is not unrelated to the fact that all the workers employed during the creation of the old Ondo State in 1976 have retired in the last three years and this has increased the financial responsibility of government towards the retirees.

He added that arrangement is ongoing to off-set the gratuity owed some people who retired in 2013.

On the arrears of the increase of 6% and 15% in pension as approved by the Salaries, Income and Wage Commission in 2010 and backdated to 2003 but implemented in Ekiti State in February this year, the Governor said that government may grind to a halt if the arrears of 13 years is cleared at once; saying that government is considering financial debt buy-back in order to enable the retirees get their money in time.

While reiterating the commitment of his government to clearing all the gratuity-related debt owed by the state government, Fayemi said his administration owes the retirees a duty to repay the service rendered by the pensioners by making life more enjoyable for them.

The Governor donated a sum of N1Million to the leadership of the Nigerian Union of Pensioners for the  upgrading of  its secretariat to which Fayemi had during construction made a personal donation of N100,000 in 2011.