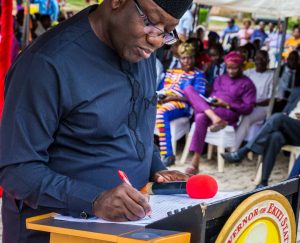 Ekiti State Governor, Dr Kayode Fayemi, has assured workers in the state that his administration will not renege on its promise of prompt payment of salaries and emoluments.

Dr Fayemi who revealed that the arrears of salaries and gratuity of workers and pensioners since 2015 had amounted to N52 billion, said government was making concerted efforts to defray all not minding that they were owed by the previous administration.

The Governor spoke on Monday at an interactive session with the workers at the state secretariat, in Ado Ekiti. He said monthly allocation of about N5.2Billion accruable to both state and local government was not enough to defray all the debt in one swoop.

Fayemi, who was applauded by the workers, urged them to give him time to address some of their needs, assuring them that while some would be attended to immediately others would come much later.

He explained that his administration had ensured the sanctity of the civil service by insisting that all appointments from the least to the highest position of permanent secretaries were merit – based.

According to the Governor, “We have tried within the limited resources available to our state not to miss payment of salaries as and when due. We’ve tried to restore to the best of our own ability and commitment to the restoration of Ekiti values that meritocracy should define our Civil service and those who have been appointed either as permanent secretaries, General Managers and Executive Secretaries, there is none of them that can say I became this because I went to governor Fayemi’s office and he likes my face so I was promoted to become Permanent Secretary.

“They all went through a process starting with an examination and then rigorous interview and it is the best of the best that emerged and we are determined to continue that in our civil service transformation program.

” The arrears of promotion you are owed in 2015 to 2017 amount to N4Billion and N488 million for the local government service. If you look at what we are owing you in 2019, which is about N705million, that is the one that I say I want to try and clear. The 2015 to 2017 notional promotion arrears would be defrayed installmentally.

“I have a responsibility to make sure that whatever we do, we must not hurt the collective in the attempt to satisfy a critical component of our population, and you are the critical component. So we are going to take a lot of what we are confronted with in phases because we don’t have the resources to clear everything that we are owing at a go.

“On salary arrears, you know I promised you when I was campaigning, that within one year we would clear the arrears. That promise still stands to a large extent and before coming here, I asked for a compilation again both at the level of the civil service where you are owed about three months and the local government, six months. We are still very committed to defraying this, it is a tough challenge but we would try and see what we can do about that.”

“On the leave bonus, leave bonus has not being paid since 2016 in the local government and in the civil service, since 2017, again, leave bonus alone comes to N6.4Billion.

There is no way we can defray all of what we have spoken about in one fell swoop. Collectively, we are owing you N57Billion, that is not just salary, there is also gratuity, leave bonus and promotion, so that gives you a picture of where the state stands and averagely on a monthly basis, about N3billion comes to the state and about 2.2 billion comes to the local government making N5.2billion every month. That gives you a picture of where Ekiti is.

Earlier, the Head of Service, Mr Ayodeji Ajayi, on behalf of Ekiti workers, appreciated the governor for turning around the dignity of the public service within one year by restoring its eroded values and culture that was bastardized during the immediate past administration.

The Head of Service commended governor Fayemi on his commitment to the welfare of Ekiti workers with improvement in the loan schemes and regular payment of salaries as and when due.