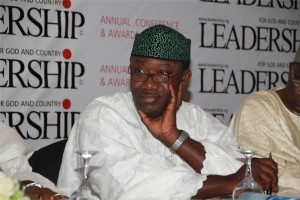 There are three developments that I consider watershed in the recent history of the Yoruba. The first is the phenomenon of the late sage, Chief Obafemi Awolowo. A tree does not make a forest; so when we talk of Awo we are also talking of all those who made important contributions to all that Awo the avatar achieved as first Premier of the Western Region. There were many firsts, so to say: First television station in Africa; Liberty Stadium; Cocoa House\tallest building in West Africa; Free Education programme; University of Ife; the Industrial areas; farm settlements, to mention but a few. Those who came after Awo have not sustained, not to talk of carrying forward, his vision. Everything has virtually collapsed. Where is National Bank today? All we are left with is nostalgia and a longing for that glorious past. To be sure Awo and his lieutenants were not saints; there were stories of in-fighting over pecuniary gains; accusing fingers were also pointed at some associates who helped themselves at the expense of our common patrimony – but the cankerworm of corruption as at that time was not as epidemic and cancerous as it is today. We can say there was decency, decorum, fear of God and lines drawn showing clearly acceptable limits. No more! Whereas Major Kaduna Nzeogwu and his idealist colleagues of January 1960 took up arms against what they called “10 percenters who make the country look big for nothing”, today, anyone contented with just 10 percent must be a saint. Awo’s age had a passion for excellence; those were times when leaders really desired to provide quality service. Again, no more! Awo’s age is gone for good! This is the age of awesome happenings! Common criminals, brazen thieves, and remorseless murderers not only walk the street but also blatantly shove it down the throats of decent men.

The second great event of our time is the formation of the Oodua People’s Congress (OPC) by Dr. Frederick Faseun and his collaborators. Before this time, the Yoruba were mauled outside and derided at home. I would not know how and where it started but the Yoruba were seen and treated generally as cowards. I suspect that it started with the events of the July 1966 counter-coup when the most senior military officer after the murder of the then Head of State Aguiyi-Ironsi, who could have made a stand, ran away. He was Yoruba. Later, he was appointed by the Northerner who took over, Yakubu Gowon, as Nigeria’s High Commissioner to London. Eventually, the death that he ran away from in Nigeria caught up with him in London. The heroics of Yoruba officers during the Civil War – the exploits of Benjamin Adekunle aka Black Scorpion alone – should have been enough to change the perception of the Yoruba as cowards, but this was not to be. When, in 1976, Head of State Murtala Muhammed was assassinated and his deputy Olusegun Obasanjo took over, the stories of how Obasanjo emerged, rather than uplift the Yoruba, further confirmed our detractors in their general perception of the race as cowards. Everywhere and each time there was communal strife, be it in Kano, Bauchi, Kafanchan, Mile 12 and Idi-Araba in Lagos, the Yoruba were worsted. But the entrance of OPC changed all of that. “Omo ina l’a n ran s’ina”, goes the Yoruba proverb. OPC has, time and again, given a good account of itself. For sure, I detest some of their excesses and wish they keep focus and stay within reasonable bounds; nevertheless, in the Nigeria in which we live today, OPC is not only desirable, it is also indispensable.

The third event that this country will not forget in a hurry is the epic battles fought by the Yoruba to protest the monumental injustice done to the race with the annulment of the June 12, 1993 election won by MKO Abiola, now late. At first, the whole nation rose up as one man to protest the annulment; gradually, however, divide-and-rule was introduced by the military and their civilian accomplices. At a point, majority of those left to fight the battle was Yoruba. Thank goodness, they saw through the vile propaganda of the anti-June 12 forces which accused the Yoruba of “sectionalising” the struggle. The price was steep but the South-west did not bate an eyelid; in the end, victory was achieved. The military retreated into their barracks and although Abiola was murdered and could not be made to enjoy the fruit of his labour, power shift to the South took place; not only that, the presidential race was left solely to two Yoruba contestants. In the end, it was given to Obasanjo, the lesser Yoruba of the two, by my own reckoning. Not to worry; the more important thing was that the military was defeated by the pro-democracy forces led by the South-west and power changed hands. Integral to the June 12 struggle was the formation of Radio Kudirat by the arrow-head of the June 12 struggle, NADECO. Radio Kudirat was the indispensable voice of the June 12 struggle, broadcasting not only to Nigeria, denouncing the military dictators but also sensitizing the international community to the struggle to end military dictatorship in the country. The democracy that we have enjoyed since 1999 owes its life to the heroics, struggles, and sacrifices made by patriots who placed their lives, limbs, and comfort on the line. Many fled into exile; family life was disrupted; and inconveniences were suffered. All this paled into insignificant when compared with those who lost their lives to the struggle.

Dr. John Kayode Fayemi, incumbent governor of Ekiti state going for second term, was a moving spirit behind NADECO Abroad, pillar of the June 12 struggle, and brain behind Radio Kudirat. Were he in the Army, his contributions to the struggle to enthrone democracy qualify him for the epaulette of a full General. Fortunately, he is one of a few of those who toiled for democracy who also have had the opportunity to nurture it. The giant strides he has made in less than four years in Ekiti attest to the view that those who fought for a cause are better able to advance its interests. This is understandable: Those who fought to bring us democracy are more likely to guard it jealousy as well as demonstrate a passion to grow it much more than those who stood to be counted as supporters of vile military dictators. Such cretins were “youths” earnestly yearning for Abacha to continue in office and transmute into a civilian president; they were coordinators of million-man marches in support of Abacha ; and were foot-soldiers of a desperate and unconscionable despot planting and throwing bombs in Lagos. Remember? So, Boko Haram is not the first vile organisation in the chequered history of this country to plant bombs; the insurgents have progenitors in the anti-June 12 forces of the military era. It is a minus for our democracy that many of those in office today never carried a placard in protest against military dictatorship; never stormed the Bastilles, as it were; were never tear-gassed; never suffered detention; never went into exile; in short, they contributed nothing to the struggle. So, how can they understand its value? And how can they grow democracy? All they know – and all that interests them – is that democracy is here and they are scampering to have the biggest cut of it. Ugandan poet, Okot p’Bitek, is apt here: He said in his epic work “Song of Lawino” and “Song of Okot” that Independence in his native Uganda (in our own case in Nigeria, it is the return to civil rule) fell like a bull buffalo and all manner of scavengers in the name of politics rushed at it to carve choice pieces for themselves, in the process trampling upon the people and chasing them away. It is what the Yoruba aptly describe as the day that the elephant dies; when all manner of knives and cudgels rear their ugly heads.

If it were possible to insist that only those who fought for this democracy occupy public offices, we would make more progress that way. Many of those messing up our renascent democracy were on the side of Abacha. If events turn today, you can be sure they will be quick to find other routes to the new corridors of power. These are the ubiquitous AGIP – any government in power. They lack principles and change political parties as if changing underwear. They are simply saying that they will do anything to get into office, however vile and despicable. Their sight is fixated on office and whatever means justifies their getting there. They kill; they maim; they tell lies; they cheat. They may never have read Nicolo Machiavelli but you find them often quoting him out of context; they simply parrot “the end justifies the means”. But how about the lorry-load of advice and instruction on honesty, integrity, and service that Machiavelli gave to the young prince desiring the position of leadership? In the forthcoming governorship election in Ekiti, Fayemi is the only credible contestant who is not a political prostitute. He has kept faith with his party. That wouldn’t mean that he agrees with everything the party does. This is honour; this is integrity. Taken with his antecedents as pro-people political activist par excellence and his impeccable record of public service, Fayemi, truly, is a knight in glittering armour. Others have somersaulted, some once; some many times over, going back and forth like Wole Soyinka’s “abiku”. This is loathsome. Good governance is first and foremost about character and consistency, not empty promises of “I will mend my notorious ways”. Ever seen or heard of a leopard that changed its spots?

This article was first published in Sunday Tribune on May 25, 2014.