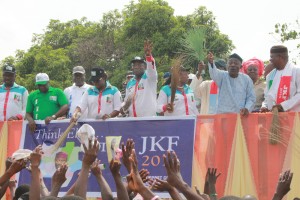 The Governor who began the day with a special thanksgiving service at St. Martin’s Catholic Church, Isan-Ekiti, called on all aspirants to brace up for issue-based campaigns and avoid the use of violence in pursuit of their ambition as the state prepares for the June 21 governorship election.

Fayemi who is seeking re-election on the platform of the All Progressives Congress (APC), said he dedicated the day to offer prayers to God for the peaceful conduct of the June 21 governorship election.

The service was attended by members of his family, members of the state executive councils, members states house of Assemblies, federal law makers representing the state and party faithful.

Fayemi pleaded that he does not want the blood of any person in Ekiti to be shed on the altar of politics,  urging all  aspirants and their supporters to go to the election  which he described as a “marketplace of ideas” to sell their programmes and allow the electorate  choose the best person to lead them.

The four-in-one event also featured an open field campaign rally at Isan- Ekiti, the commissioning of the Campaign office at Ado –Ekiti and unveiling of the JKF re-election campaign logo.

Emphasizing on the need to give peace a chance at the governorship poll, Fayemi said  Ekiti has witnessed peace since he came to office in October 2010and has since moved on from a state that used to experience “one week one trouble” to a peaceful and prosperous state.

In his remarks at the church service, Fayemi said he chose the day the Independent National Electoral Commission (INEC) lifted ban on open campaign to commit his second term ambition to the hands of God in his land of nativity.

He noted that to ensure that the governorship poll is peaceful, politicians, security agencies, voters and other stakeholders must not allow the peace of the state to be disturbed by those who want to spill blood because of politics.

Fayemi said, “If there is an election that should be issue-based and devoid of violence, it should be this one.

“We are all witnesses to the fulfilment of God’s purpose in our land. Our people are not stupid, they will make up their minds whether they want to return to the sordid past of one-week-one-trouble or maintain the path of peace, tranquility, progress and development we have been experiencing since we came to office three and a half years ago.

“No ambition, not even my own, is worth the spilling of the blood of any person in Ekiti and I want to urge everyone of us to conduct ourselves in a non-violent manner.

“This is a contest of ideas and the people can judge us on how we have conducted ourselves since October 2010. Those who believe they have better ideas are free to take them to the people and leave the people to decide the direction of our journey.

Earlier in his homily, the Catholic Bishop of Ekiti Diocese, the Most Reverend Felix Ajakaye, called on INEC to be independent in name and in deed saying “Ekiti people are honourable and won’t take nonsense”.

The bishop who said he has heard some people complaining that Fayemi does not throw money around like some politicians charged the Governor to maintain his attitude. He noted that Fayemi’s refusal to throw money around, but spent it on developmental projects, had resulted in the delivery of many life-changing policies and projects in the state.

The cleric advocated that lawmaking in Nigeria should be made part-time to give room to people who have genuine intention to legislative for the people without being motivated by money.

The indigenes of Isan-Ekiti,  acting under the aegis of the Home Support Group,  declared at the rally that Fayemi has performed well in office to merit another term and will be supported to realize the ambition.

The Governor was joined on the campaign podium by his deputy, Prof. Modupe Adelabu, Wife of the Governor, Erelu Bisi Fayemi, first civilian Governor of the State and APC National Vice Chairman (South West), Otunba Adeniyi Adebayo and other top government officials.

The traditional ruler of the community, the Onisan, Oba Sunday Ajiboye, prayed for the Governor saying his ancestors will back Fayemi to win re-election in the June 21 election.

The |President of Isan Progressive Union (IPU), Chief Bade Gboyega, said all indigenes of the community will give their  total support to their illustrious son, whom he said had done the community and indeed the state proud by his administrative style.

Addressing the crowd, Fayemi appreciated the support he has enjoyed from his kinsmen for the past three and half years saying the rally has proved that he is well accepted at home.

He explained that all parts of the state have been touched by his administration in the delivery of dividends of democracy adding that he is encouraged to run for another term by his desire to serve Ekiti people better.

Fayemi said he has represented the Isan people well as his administration has run a corruption-free administration and ensured development across the nooks and crannies of the state.

The Governor urged Ekiti people to be wary of “the party of looters” threatening to stage a comeback to power saying Ekiti people have resolved not to go back to the era of criminality and brigandage.

“No government official has been arrested by EFCC since we came to office and we are now enjoying peace in Ekiti State. I heard that the looting party, the fraudulent party are threatening again but all we are saying is forward ever backward never.

“In this journey, I will never walk alone, Ekiti will not go back to darkness. The light has come to Ekiti and the light will stay in Ekiti”.