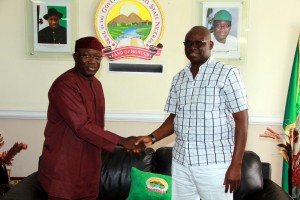 Ekiti State Governor-elect, Mr Ayodele Fayose, has described the incumbent Governor of the State, Dr Kayode Fayemi as an unusual Nigerian leader who puts the interest of his State ahead of personal gains.

Mr Fayose who gave the commendation in Ado-Ekiti on Monday during a courtesy visit to Dr Fayemi in his office said Fayemi’s attitude to the outcome of Saturday’s poll shows that “he conceded in the overall interest of Ekiti State”.

The Governor-elect said Fayemi has demonstrated commitment to the peace and development of the State since 2010; assuring that he would complement all achievements made by the incumbent Governor when he hands over in October.

Fayose said: “I got a call from the Governor, our leader, Dr Kayode Fayemi and he told me expressly of his readiness to ensure that the State moves forward by accepting the result in the outcome of the June21 governorship election which I consider he is the only statesman that can do that without being immodest.

“I want to equally understand the fact that as a leader and governor of a State, when such gestures are made, it behoves on people like me as a leader on the other side to meet with him and acknowledge the fact that he conceded in the overall interest of Ekiti. It is unusual; it is not Nigerian or an African-like for leaders to concede readily”, He added.

The governor-elect while urging supporters of each political party to shun acts that can jeopardize the peace of the State said it was time for reconciliation in order to build upon what Fayemi had done.

“I hope this meeting will further strengthen the peace in our State, and I want to add that our supporters must help us to help this State. Some came to my house yesterday singing all sorts of songs, I had to wake up and stop them. This is not a time to sing such songs. It is a time for reconciliation and love, to learn from the past and ensure that we have a wonderful future ahead of us. This leadership calls for us to live according to the rules of the game and ensure that tomorrow, we will be made accountable.

“Dr Fayemi has demonstrated commitment to peace and I am going to complement his effort. I am going to take it up from wherever he stops and make sure that immediately after office, he still continues to enjoy his rights and benefits of a leader that has served his own people.”, he said.

In his response, Governor Fayemi reiterated his commitment to delivering the dividends of democracy to the people within the next few months before the transition to another regime.

The Governor stressed that politicians should not misinterpret governance with politics during the period as this could heat up the polity even as the administration still has obligations to deliver to the people until October 15 this year.

“It is important for the benefit of our people, the tenure of this government ends on October 15, 2014 and it is absolutely important that government continues to deliver the goods to the people of Ekiti until we are constitutionally mandated to leave office. To that extent, it is important that politics should be treated separately from governance and that politicians by their very nature would want to behave in a particular way but we as leaders must ensure that we handle that with restraints so that Ekiti people are the beneficiaries at the end of the day. We don’t want anything that will heat up the polity simply because we have a process of transition in place”, the Governor asserted.

Dr Fayemi while reacting to Fayose’s surprise at his concession stated his respect for the will of the people even as he said that this is one of the ways Ekiti State can progress faster considering its disadvantaged position.

“For me, leadership is about service. It is about sacrifice. It is not about personal aggrandizement, not about personal benefit but the duty that we owe our people is to ensure that Ekiti continues to progress. Anything that will make the state progress is what I will be associated with. People have said my gesture is strange, it is unafrican, well I am a democrat and the will of the people is the basis of democracy. If it is the will of the people, we do not have a choice than to respect their will, and to do everything to ensure that we deepen this democracy not just for Ekiti but also for Nigeria”, he said.

The Governor added that his meeting with Fayose is aimed at setting up a transition committee which will fine tune the process leading to the transition from the current administration to the incoming one.

“The lesson for us is that as Ekiti people, whatever we do must be in the overall interest of this place even when we suffer personal losses, as long as our State which is still largely disadvantaged can get out of this and our people can laugh last by having a better society entrenched in this State, we will all have been winners of this process. We must continue to fine tune this process so that whatever gap may still be there is erased in the succeeding years.

“ We have shown Nigeria and the world that politics could be handled differently in a manner that is in the overall interest of our people. We may be small, it is not by size that lessons are learnt but by sincerity of purpose, sacrificing leadership and commitment to our people”, the Governor said.

Both Fayemi and Fayose later met behind closed doors.