Featured, NewsFayemi Is A Gift To Ekiti – State Assembly

Fayemi Is A Gift To Ekiti – State Assembly 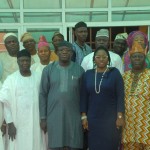 The Ekiti State House of Assembly has described the outgoing Governor of the State as a special gift from God to the people of the State.

Some Members of the House of Assembly who spoke at an executive session in Ado Ekiti on Monday said the Governor had in four years transformed the State to the extent of becoming a reference in many sectors in Nigeria.

The Speaker of the Assembly, Dr Adewale Omirin commended the Governor for developing the state in all ramifications and leaving behind a legacy of honour, service and integrity.

The Speaker who lauded the Fayemi-led government for its purposeful leadership style said the Governor had created a friendly relationship between the two arms of government which had culminated in the all-round rapid development of the State.

Omirin assured that the Assembly would ensure that the vision of the outgoing administration is transferred to upcoming generations of leaders in the State.

Speaking on behalf of the three Senatorial Districts of the State, Hon. Gbenga Odebunmi (Central), Hon. Bunmi Oriniowo (North) and Hon. Yomi Daramola (South) said the Governor emerged at a critical time in the history of the State and repositioned the once troubled State for excellence.

Hon. Daramola said the impacts made by the outgoing administration are indelible as there was no community in the State which did not benefit from the various developmental projects of the

In his remarks, Governor Fayemi thanked the Assembly members for the support given to his administration by providing the legal framework that enabled his government put the State on a better footing.

The outgoing Governor said his government would not have done all it did without the commitment demonstrated by the Assembly; adding that the public service is the highest form of duty that anyone can render to the country.

He stressed that it is incontrovertible that Ekiti is better under him than he met it.