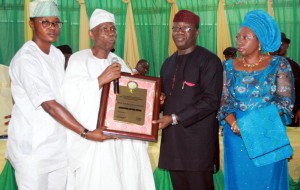 Elder statesman and former Justice of the International Court of Justice (ICJ), Prince Bola Ajibola (SAN) has commended Ekiti State Governor, Dr Kayode Fayemi for initiating the Social Security Scheme for the Elderly, saying that the Governor is a perfect replica of late sage, Chief Obafemi Awolowo who was a noted welfarist.

The former Attorney-General of the Federation who gave the commendation while presenting Fayemi with the Senior Citizens Care Foundation Excellence Award, Thursday evening in Ado-Ekiti, described the Ekiti State Social Security scheme which is the first in West Africa, as “unique and historic”.

The award is in recognition of Governor fayemi’s pioneering efforts in social security scheme for elderly citizens in Ekiti state.

Ajibola who described the Fayemi administration as one with “great foresight” to have initiated the scheme asserted that with the implementation of the scheme in the State, it is apparent that it is “do-able” and must be replicated in all states of the federation.

He recalled that it was Chief Awolowo who pioneered social safety programmes in Nigeria; saying that “for the first time in the history of the country, aside Awolowo, Fayemi is the only person whom we can call a welfarist”.

Prince Ajibola, who together with members of the group, also witnessed the payment of the monthly N5,000 stipend to elderly citizens for February in Ikere Ekiti, asserted that the scheme is not a political gimmick but a welfarist approach to governance.

He described the scheme as a good example of how government should care for all its citizens.

“You have a government with foresight, a government that helps and has compassion. We have seen it and we are surprised because we never knew the scheme is this great. I am very happy to see these elderly citizens in good health. You might not really know the benefit of this scheme but this is indeed remarkable.

“We have seen it that it is do-able and it can be done. This is not politics, this is not campaigning, this is not electioneering affair, this is a show of welfarism in practice in Ekiti state.

This is a demonstration of how a government can be very dedicated and show care for the people. When Awolowo became the head of the Western Region in those days, he did a lot of work which we still remember today. We now have someone for the first time in the history of our country aside Awolowo whom we can call a welfarist. This is not politics. This can only come from the heart of someone who has the people at heart”, he said.

The elder statesman who recommended the scheme for the Federal Government expressed possibility that the Boko Haram insurgency might not have ensued if there is a social safety net for the weak and vulnerable sections of the country.

Speaking at the payment of the monthly stipend to about 2000 elderly citizens in Ikere Ekiti on Friday, Governor Fayemi said government is established to benefit the people and lift up the weak and vulnerable in the society.

The Governor who opined that the scheme is an idea whose time has come described it as a crucial part of his administration’s objective of banishing poverty from the state as it is borne out of the devotion to the Yoruba culture of social justice which “prescribes that the strong in the society must cater for the weak and the elderly in the great cycle of life”.

“We have taken appropriate measures to institutionalize the initiative in perpetuity so that administrations coming after us would not be able to undo our legacy. In this regard, we have signed into law the Social a Security law 2012 which makes it compulsory for government to sustain the programme regardless of the political affiliation of the government of the day. Old age is not a crime and treasured members of society should not be made to suffer while going through the normal course of life”, he said.

On the award bestowed on him by the Senior Citizens Care Foundation, Fayemi said he is not disposed to receiving awards from quarters he cannot vouch for as being transparent and sincere but obliged the Foundation because of the impeccable character of Prince Ajibola who is the leader of the delegation.

Fayemi who expressed worry at the debased nature of the society that rewards corruption and abuse the value systems said the monetization of the system has led youths astray into getting untoward role models.

The elderly citizens who trooped out in their thousands prayed that God would extend Fayemi’s tenure beyond 2014  just as he has prolonged their days with the monthly stipend he pays them.