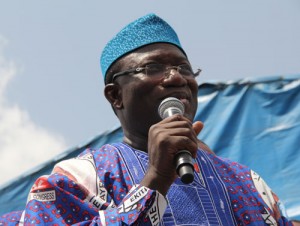 Ekiti State Governor, Dr. Kayode Fayemi, has congratulated the people of the state and Nigerians in general for witnessing another Easter season.

The Governor in his Easter message, urged Ekiti people to emulate the virtues of Jesus Christ who laid down his life for the salvation of mankind.

He congratulated Christians for the successful completion of the Lenten season, a period of 40 days of fasting and prayer which culminated in Easter- an important celebration in the Christian calendar.

The Governor called on Christians in the state to emulate the virtues of love and sacrifice which the Lord Jesus Christ exhibited in ensuring the salvation of humanity.

Fayemi noted that the Easter period offers Christians and the entire people of Ekiti State an opportunity for sober reflection, even while rejoicing with one another for witnessing the season. He called on Nigerians to imbibe and reflect on the lessons associated with the crucifixion of Jesus Christ on the cross at Calvary.

The Governor urged Christians in the state to use the period to pray for peace, development and prosperity of Ekiti State, especially as the state approaching the governorship election in two months.

He also urged them to use the opportunity to pray for God’s intervention in the affairs of the country, especially in bringing lasting solution to the escalating cases of insurgency which is threatening the peace of the country.

He commended Christians in the state for living in harmony with adherents of other religions , adding that this has contributed immensely to the peace being enjoyed in the state.

While calling for prayers from the people of the state for his administration, Fayemi said although the task before him and his team is enormous but tremendous success is achievable with the support of the people.

Fayemi advised the people of the state to be moderate in celebrating Easter noting that the period is not for eating and drinking alone but to reflect on the past and hope for a better future for themselves and the state.