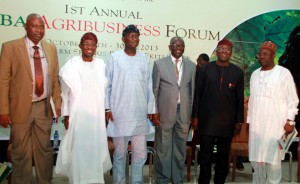 Nigeria may end up being unable to feed herself unless the citizens and governments make deliberate efforts to return to the agriculture sector, the mainstay of the nation’s economy in the 1960s.
This was one of the concerns raised by Ekiti State Governor, Dr Kayode Fayemi, his counterparts from Lagos and Osun states, Babatunde Fashola (SAN), and Rauf Aregbesola as well as the chairman of the Senate committee on agriculture, Senator Emmanuel Bwacha at the maiden Agbeloba Agricbusiness Forum organized by the Ekiti State Government, held at the Ikogosi Warm Springs Resort on Tuesday.

The Governors who expressed worry that the neglect of the agric sector has made the nation vulnerable to food insecurity even as Nigeria is the second highest importer of rice as well as the highest importer of fish in the world, said it was high time the nation stopped wasting her Argo- potentials.
Governor Fayemi in his remarks said although agriculture has been tagged the next frontier for economic development in Nigeria and lots of discussions are focused on harnessing the agric potentials yet poverty persists.

The Governor who urged all stakeholders to take the development of the agric sector seriously stated that this is the only way to guarantee the future of Nigeria beyond oil.

While disclosing that the Southwest regional integration agenda has availed States of the southwest the formulation of common agric policies as well as developing a comprehensive master plan to drive the sector, Fayemi said the federal government is expected to play a supportive rather than a regulatory role in reviving the sector.

He stressed that his administration is fast changing the face of agriculture in the state through various initiatives including Agbeloba agribusiness and the Youth in Commercuial Agriculture Development (YCAD) forum to initiate a “departure from the former way we consider and treat agriculture”.

Fayemi added that the various initiatives of his administration have attracted investments to the tune of $300 million in the last two years.
The Governor hinted that the three Senators representing the State have pooled their constituency allowances together to the tune of N1.8 billion for the State Government to execute its irrigation project, a step aimed at all-year round agric production in Ekiti.

Governor Fashola, during the executive plenary session, called for a change in the  orientation for those driving the agriculture sub-sector of the economy so that it could produce appropriate result that will make the country food sufficient.

While commending the gesture of the Ekiti senators on irrigation funding, Fashola said irrigation is critical to agriculture. He described it as “another vital input for the farmer”.
He asserted that the nation had long wasted time on focusing on the oil sector while other countries were exploring their Agro potential but expressed relief that Nigeria now seem to be “facing the direction the whole world is facing now”.

Governor Aregbesola in his remarks explained that the Southwest states are focusing on exploring the food market in Lagos State by building a supply chain even as daily food consumption in the state is valued at N3.5 billion.

He added that if the States could tap into the available market in Lagos, they would realize N350 million daily and actualize their agric business prosperity.

Also speaking on appropriation for the sector, Senator Bwacha said the Senate is working towards appropriating more fund for the Federal Government to pursue its agric goals, but expressed worry that government does not implement what is being appropriated.

Bwacha added that the implementation crisis had been on since 1999 but the present government is working to correct the trend.

In his speech, the Minister of Agriculture, Dr Akinwumi Adeshina, stated that the vision of the Federal Government is to move Nigeria to become an agriculturally industrialized economy as it plans to grow the size of the sector from the present level of $99 billion per year to $300 billion per year by 2030.

The Minister who was represented by Alhaji Azeez Olumuyiwa, a director in the ministry said government policy is to make the country rice self sufficient within five years as it has announced new set of fiscal incentives to encourage domestic producers of rice including raising tariffs on imported brown and finished rice.

He stated that the policy is working as three new integrated rice mills with total capacity of 90,000 metric tons have been established by the private sector.

The event was attended by representatives of the various Agricultural institutions which have partnered with Ekiti State Government in reviving the sector, as well as farmers from different parts of the world.