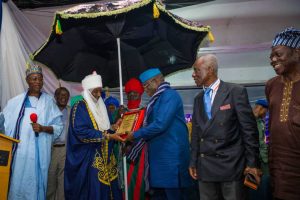 Ekiti State Governor, Dr Kayode Fayemi has called for a review of the country’s education curriculum so that it can meet international standards and adequately respond to the challenges the nation is facing.

Speaking at a lecture commemorating 110th Founder’s Day of King’s College, Lagos, the Governor said there should be a shift from the curriculum which is aimed at producing certificated individuals rather than individuals who can contribute practically to the development of the country.

Dr.Fayemi whose keynote address was titled ‘The Promise of Kings College and the Development of Nigeria: Stakeholders in Partnership with Government for Better outcomes in the Education sector” also called for the restoration of merit over quota system in the admission of students into legacy schools across the country.

In attendance at the lecture were prominent Nigerians and old boys of the school, including the Emir of Kano, Alhaji Mohammadu Sanusi II.

The Governor commended the legacy schools, especially King’s College, for “ producing leaders who are contributing to national development”, He also called on all stakeholders to work together to re-invent the days when the nation’s education system produced men and women who are truly worthy in character and learning.

“I can only imagine the immense pressure on school authorities during admission cycles. It is during such times that we see different lists of people seeking admission. This is a reflection of the decay in our society and the gradual relegation of meritocracy in favour of other considerations.

“It is possible for the King’s College community to show leadership by leading the country back to the path of meritocracy, where your admission is solely a function of your performance in an entrance examination ranked amongst your peers.

“We must bring back the days that every common citizen could access such institutions as King’s College without knowing anybody. If you don’t qualify to enter a school, simply apply to the next available school. While the promotion of the federal quota system is not out of place for a diversified country as Nigeria, merit should not be sacrificed on the altar of such arrangements”, he said.

While urging stakeholders to examine the role of the school in national development, Dr Fayemi said government at all levels must build more schools to cater for the rising number of students and curb overloading existing schools beyond their capacity.

The governor said the current challenges facing the nation’s education sector must be surmounted now in order to provide the “required solutions for Nigeria’s development in all ramifications – generation after generation”.

He said government, school authorities and other stakeholders must be proactive and strategize in order to reposition the nation’s education system.