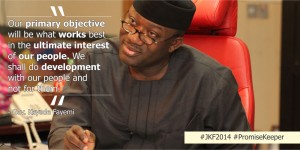 As the build-up to the Ekiti State governorship election heats up, the incumbent, Dr. Kayode Fayemi, of the All Progressives Congress, has begun the use of the new media to win over the electorate.

New media platforms particularly came in handy as tools for political engagement during the November 2013 Anambra governorship election, as all the candidates leveraged on them.

Newly sworn-in governor of Anambra State, Willie Obiano, who claimed to have “campaigned vigorously on Twitter” had said while relishing his victory at the poll that, “We must thank God for the social media.”

However, findings by iPUNCH on Monday showed that with less than three months to the election, much has not been heard online from the other two leading candidates eyeing the governorship seat of Ekiti State.

While no social media accounts could be traced to the standard bearer of the Peoples Democratic Party, Ayo Fayose, the sole candidate of the Labour Party, Opeyemi Bamidele, who has a Twitter account, has so far been missing in action.

Bamidele, who currently represents Ado Ekiti/Irepodun-Ifelodun Federal Constituency, opened the Twitter account in June 2012 to interact with his constituents.

The member of the lower chamber of the National Assembly only boasts of a following of 230 people, with a paltry 26 messages he had managed to post on the micro-blogging service.

Bamidele, who describes himself as a pro-democracy activist and lawyer without borders in a message to his 230 followers on February 28 says, “We shall move Ekiti together.” Since then, no word has been heard from him on the social network about his governorship ambition.

A visit to Bamidele’s website, www.mobinthehouse.com, also shows that the lawmaker may not have perceived the platform as a vital factor for realising his ambition.

The majority of the contents on the site revolve around his activities and achievements as a federal lawmaker, while little mention is made about his governorship bid.

But Fayemi hints that he is deploying the use of his digital media accounts to ensure success at the poll.

He says he will be engaging his over 42,000 followers on Facebook and Twitter as he seeks a second term.

Employing the use of the hashtag #EkitiDecides, #JKF2014 and #promisekeeper, Fayemi challenges his opponents on his newly verified Twitter page to “let the conversations begin.”

He notes on Facebook that he will be “embracing innovation and honouring tradition” as he campaigns both online and offline.

He adds, “I admonish all the players to embrace new rules of engagement grounded in conversations. I charge all actors in the political space to exhibit the highest degree of nobility in word and conduct. Let the candidates begin to lay bare their plans to govern Ekiti State.

“Our primary objective will be what works best in the ultimate interest of our people. We shall do development with our people and not for them. Advance new thinking about our social security for the elderly, protection for the strong, help for the weak.”

It is also a beehive of activities on Fayemi’s website, www.kayodefayemi.com.ng, as he leverages on the platform to sell his candidature as well as draw traffic to his social media accounts.

Unlike Bamidele, the plug-ins of all the social accounts Fayemi makes use of are embedded on his website.

While the Permanent Voter Registration exercise conducted by the Independent National Electoral Commission lasted, the governor also educated citizens of the state by reeling out the guidelines for the process on the website.

Meanwhile, while Fayose appears to have shunned the use of the new media, the ruling Peoples Democratic Party is bridging the gap on his behalf.

The party writes on its official Facebook page that irrespective of the situation on the ground, Fayose will win the day.

According to the party, with Fayose’s emergence, “Fayemi is gone.”

“Ayo Fayose is the Peoples Democratic Party candidate for the Ekiti State gubernatorial election. The All Progressives Congress is finished. Fayemi is gone,” a post on the party’s Facebook page reads.

This article was first published in The Punch on Tuesday, 25th March, 2014.