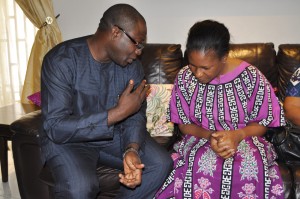 L-R: Ekiti State Governor, Dr Kayode Fayemi, with the widow of the late Commissioner for Culture and Tourism, Ondo State Mr Deji Falae, Ese, during the Governor's condolence visit to the Falaes' residence in Lagos.

Ekiti State Governor, Dr. Kayode Fayemi, has condoled with the government of Ondo State and the family of the late former Governor of the state, Dr. Olusegun Agagu, on the crash of the aircraft conveying Agagu’s corpse to Akure on Thursday.

No fewer than 16 people were reported killed in the crash which occurred in Lagos shortly after the plane took off from the Murtala Mohammed Airport.

Governor Fayemi  described the incident as a tragic end of relations and mourners who were on their way to pay their last respect to the late Dr. Agagu, whom he described as a decent politician.

Dr. Fayemi in a statement signed by his Chief Press Secretary, Mr. Olayinka Oyebode, described the crash and the attendant death of relations of the deceased as very unfortunate and depressing, adding that it was a “calamity of unimaginable proportion”.

He said the crash has aggravated the grief of the Government and people of Ondo State and the Agagu’s family whose officials and members were victims of the disaster.

The Governor said he was extremely shocked by the fact that the victims died while deeply involved in the burial activities of the late Dr. Agagu. He said the crash, coming at a time the family of the late governor were yet to come to terms with his death, was most unfortunate.

Dr. Fayemi called on the relevant agencies of government to investigate the circumstances leading to the crash. He prayed that the nation will never witness such a cycle of disasters again.

Dr Fayemi prayed for quick recovery and speedy healing for those who got injured in the crash and also prayed for the peaceful repose of the souls of the dead.

“This is a very sad day indeed and quite unfortunate. We share in the pain of this huge loss with our brothers and sisters in Ondo State. Our prayer is that God will console the families  of the victims of the crash and heal the wounds.”, the statement added.