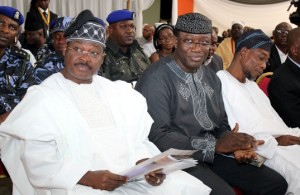 Ekiti State Governor, Dr Kayode Fayemi has canvassed  influx of decent and well-meaning Nigerians into the nation’s politics and governance process; saying that this would help in achieving the dream of a new Nigeria.

The Governor made the call in Ibadan on Monday at a Special tribute session held for the late former Governor of Ondo State, Dr Olusegun Agagu.

Governor Fayemi stated that the nation cannot continue to move on a journey without map, hence the need for decent men and women who could lead the country to the desired destination to show interest in politics.

Fayemi in his tribute, said Agagu’s greatest legacy was his demonstration to Nigerians that the entry of decent Nigerians into the arena of politics and governance holds the “hope to seize the space from ignoble brigands and set our nation on the path to sustainable development”.

He said: “The involvement of decent men and women of honour like him in politics was the torch that lighted the paths of many of us who eventually made the move. When people ask why I left the comfortable precincts of academia and activism to get involved in politics, I respond by explaining that the dichotomy between both realms is false, and point to forebears like Dr Agagu who excelled on both fronts – it didn’t matter that we belonged to different political parties”

Speaking at the event, former President Olusegun Obasanjo who was represented by his wife, Bola, said the nation would miss a reliable and committed leader in Agagu even as he described him as a lover of his community.

Obasanjo described the deceased was a willing contributor to the development of Nigeria as well as “a worthy and respected co-worker”.

Osun State Governor, Mr Rauf Aregbesola in his remarks said the deceased lived his life in commitment to the well-being of the people of Ondo State and was passionate in add value to the society through his knowledge.

Aregbesola lamented that the late Agagu would have contributed to the Development Agenda for Western Nigeria (DAWN), stressing that the former Ondo State Governor was favourably disposed to the regional integration agenda.

Also speaking, the Oyo State Governor, Senator Abiola Ajimobi described the deceased as a Trail- blazer -trailer in the mucky waters of the Nigerian politics, and is not to be mourned but celebrated for his exemplary leadership.

Ajimobi added that Agagu gave his best as governor and consistently built “bridges” of hope to connect the people who were cut off from other parts of the State; adding that Ondo people were lucky to have him.

“We will continually remember our brother and friend. I don’t join people to abuse parties that they didn’t do well. What we should ask is what they did when they were there. All the past governors did well because without the past, we cannot have today that we are building on, and the future of hope”, he said.

At the event were the Governor of Ondo State, Dr Segun Mimiko who was represented by his Chief of Staff, Dr Kola Ademujimi, former Governors of Ekiti, Osun and Ogun States, Mr Segun Oni, Mr Ayo Fayose and his wife, Feyisetan, Prince Olagunsoye Oyinlola, and Otunba Gbenga Daniel among other dignitaries.