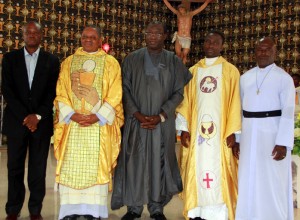 The Governor of Ekiti State, Dr Kayode Fayemi has assured Ekiti people that his administration will deliver more dividends of democracy if he is re-elected in the forthcoming June 21 governorship poll.

The Governor gave this assurance while receiving the Knights of St John’s International, Lagos Commandary led by its former President, Sir Kole Olowu on a courtesy visit to Fayemi in Ado Ekiti at the weekend.

Governor Fayemi said contrary to insinuations that second term governors usually relapse into non- performance, he is in service to God and Ekiti people and has no reason not to provide accountable service to the people who voted him as governor.

The Governor asserted that he sees politics as a means to serve the people and make a positive difference in their lives.

This, he said, he has been doing since he assumed office in 2010 and evident in the massive road construction , transformation of the education system, succour to elderly citizens through the Social Security Scheme which is being replicated in two other States, and the free health programme among others.

Fayemi said the people of the State should expect more people-oriented programmes when he is re-elected as he is dedicated to providing selfless service that will bring about the Ekiti which all and sundry will be proud of.

The Governor who said that Catholicism has played a major role in his life added that everything he is doing in office is influenced by his dedication to the service of God.

Earlier, the former President of the association, Sir Olowu  had charged the governor not to relent in his efforts to provide quality leadership for the State; saying that the transformation brought to Lagos State by Governor Babatunde Fashola is a signal that a second term governor can do much more for the people.

Olowu said that the Catholic Church across the country have pledged their support for Fayemi to win the forthcoming election since he has not disappointed the church.

The former President who decorated Fayemi as a friend of the Knights of St. John stressed that the Governor has done enough for Ekiti people to return him as governor come June 21.

In another development, Governor Fayemi has presented an 18-seater Toyota bus to the Council of Traditional Chieftaincy Holders in the State.

The Council had approached the Governor four months ago to table before him issues ranging from their entitlements under the Chiefs Law, parcel of land to build their secretariat and a bus for each of the three senatorial districts.

Fayemi while commending them for maintaining peace with the monarchs in their domains said government would soon set up a committee which will look into the grading of monarchs and the entitlements of the Chiefs.

The acting Chairman of the Council, Chief Emmanuel Oyewole thanked Fayemi for donating a bus to the council; saying that this is enough recognition for the chiefs who are assisting traditional rulers in the 132 communities in the State.

Oyewole added that the council sees itself as a part and parcel of government because of the roles it plays in ensuring peace in all communities.