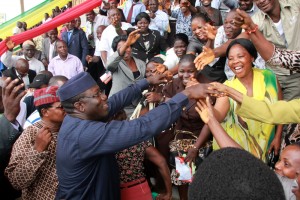 Ekiti State Governor, Dr Kayode Fayemi, on Monday announced the decision of his administration to commence payment of the 27.5 percent Teachers’ Pecuniary Allowance.

The Governor whose administration currently pays 16 per cent of the allowance, based on negotiation with then teachers, announced the readiness of his government to effect full payment while addressing teachers at the sensitization programme on the State Education Programme Investment Project (SEPIP) in Ado Ekiti on Monday.

Also, the Governor announced the abolishment of the Teachers Development Need Assessment (TDNA) and its replacement with well structured capacity building programmes and administration of questionnaires to students.

These developments are coming barely two months after the state  commenced payment of car loans to primary school teachers in the state- the first in the country.

Governor Fayemi at the well attended forum directed the Deputy Governor, Prof. Modupe Adelabu, to liaise with the leadership of the various teachers unions on the prompt implementation of the allowance.

The Governor said: “I want to thank all the teachers for their understanding in accepting the negotiated 16% of this allowance. In our various meetings, they were made to appreciate the lean resources of the State but saw our genuine willingness to meet their demands if we were in a position to do. I am happy to inform you that you will now have the remaining 11.5%”, Fayemi announces.

On hearing the announcement, the teachers who filled up the Oluyemi Kayode Stadium to the brim rose up and for about 10 minutes continued shouting “Ko duro soke” the Governor’s re-election slogan.

Attempts to calm the apparently joyous teachers were futile as they were too eager to allow the Governor complete his announcement.

commenting further on the abolishment of the TDNA, Governor Fayemi hinted that the Ministry of Education, Science and Technology would embark on capacity building of teachers through cluster school training programmes, local and overseas training, seminar and workshops.

The Governor stated that the committee on the advancement of graduate teachers in public primary school had recommended a parallel career scheme as obtainable in the Civil Service so as to enable NCE and Degree holders have different career progression.

Fayemi while reacting to a rumour that his government is compiling the list of workers for disengagement assured that his administration is not planning to sack teachers who have spent over 30 years in service.

He said he is not unaware of the politics being played by one of the candidates in the forthcoming election with the State’s performance in the last WAEC result, stressing that the 34th position claimed by the candidate is a farce which has no evidence.

The Governor also presented an 18-seater bus to the State chapter of the Nigeria Union of Teachers (NUT) as earlier requested by the Union.

Speaking on behalf of the teachers, the Chairman of NUT, Mr Kayode Akosile commended the Governor for acceding to implement the 27.5% pecuniary allowance despite the meager resources that accrue to the State.

The chairman who thanked Fayemi for fulfilling the promises he made to teachers on the provision of the Bus and the upgrade of the status of teachers from level 16 to 17, assured that Ekiti teachers are solidly in support of the Governor’s re-election.

Akosile added that Ekiti teachers have not had it so good since the creation of this State and will never turn to ingrates when the time comes to repay the governor’s gesture towards them.

It is recalled that the state had in 2012  commenced the payment of rural teachers allowances to teachers posted to rural areas in the state as well as a special allowance to teachers teaching core science subjects, in the bid to motivate the teachers for optimal performance.

At the sensitization programme were the Deputy Governor, Prof. Modupe Adelabu, Commissioner for Education, Mr Kehinde Ojo, Chairman of the State Teaching Service Commission, Chief Bayo Adeniran, and teachers from schools across the State.