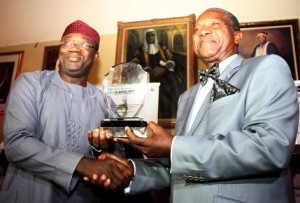 In recognition of the all-round rapid socio-economic development of Ekiti State, the Nigeria-American Chamber of Commerce (NACC) on Wednesday,  conferred on Ekiti State Governor, Dr Kayode Fayemi the award of Good Governance.

The President of the Chamber, Mazi Sam Ohuabunwa, explained that the awards were not conferred arbitrarily but based on the outstanding performances of the recipients in their states.

Ohuabunwa who stated that the governors have proved that they have the capacity to properly manage their States, emphatically praised Fayemi for his performances, praying God to bless the nation with governors like him.

Receiving the award, Governor Fayemi said leaders must let people know that leadership is about demonstrating responsibility and positively transforming the lives of the people.

He added that his administration has consistently demonstrated purposeful leadership by impacting the lives of the citizenry, even as all the communities in the State can boast of at least a project initiated and completed to serve their needs.

The Governor stressed that the award is a clear indication that NACC recognizes the efforts put in place by his administration to create enabling environment for businesses to thrive.

Fayemi said the efforts are already yielding positive results with no less than $300 million dollar investment in the Agro-allied sector alone while other sectors are also thriving.

While calling on private sector investors to make Ekiti their first choice of destination for investment, the Governor opined that government cannot run businesses hence setting up of Fountain Holdings company to help manage government-owned businesses in the State.

He assured that government has put in place some regulatory framework for investments to thrive in the State.

Earlier, the Chairman of the occasion and erstwhile Minister of Health, Prince Julius Adeluyi- Adelusi had urged Nigerian leaders to emulate former South African President, Nelson Mandela who ruled in simplicity and commitment to the service of the people.

Adelusi stated that Nigerians need leaders who can effectively manage the resources as well as the challenges in the country while also expressing a sense of commitment to the people.