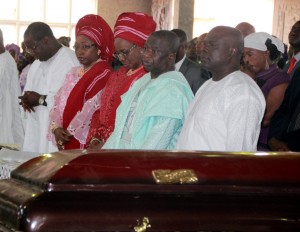 The remains of Madam Eunice Fajuyi, wife of the first military Governor of the old Western State and hero of the 1966 coup, late Col Adekunle Fajuyi, were laid to rest in Ado- Ekiti, on Saturday, amid tributes for her and late husband’s courageous acts.

Speaking at the funeral service, the State Governor, Dr Kayode Fayemi said the state government would consider setting aside a day as a public holiday in recognition of the valiant act of the late Colonel Fajuyi.

The Governor noted that the legacy of the late Fajuyi was built upon the foundation of pristine Ekiti values that is consistent with the tradition passed down by the Ekiti forebears and this is a reminder of the Ekiti personality and the path that upcoming generations should follow.

Fayemi added that the Ekiti identity of integrity and commitment has forever been etched in the hearts of Fajuyi’s primary constituency, the military and the whole country through his sacrificial life.

While justifying the State burial given to the Fajuyi matriarch, Governor Fayemi said there is the risk of allowing the larger-than-life persona of Col Fajuyi to overshadow the nobel role that Madam Fajuyi played in supporting her late husband during his lifetime and her dedication to the preservation of his legacy.

The Governor stressed that the deceased also had her place in history as she bravely embraced the fate of her husband during the epochal moments when “he was faced with the decision of either cowardly running away for his life or honourably embracing the same fate as his guest who was the principal target of the coup”.

Fayemi commended the Fajuyi matriarch for stoically bearing widowhood as well as managing single parenthood with grace and wisdom.

“In my opinion, the fact that the late Col Fajuyi (a husband, father and family man at the time) chose the high road of Honour at personal risk, is a testament to his assurance that he had a spouse who would not question the values that informed his decision and who was up to the task in keeping the home front”, the Governor said.

Earlier in his sermon, the Catholic Bishop of Ekiti, Most Revd Felix Ajakaye had extolled the late military Governor for offering his life to preserve the unity of Nigeria which was under threat by mutinous soldiers who had come to kill the then Head of State, Major General Thomas Aguiyi-Ironsi.

The Bishop noted that Fajuyi’s preparedness for death made him willing to sacrifice himself for his guest and boss; adding that everyone must also be equipped with the same mentality of sacrifice that has preserved the integrity of the Yoruba race and the unity of Nigeria.

Ajakaye who commended the Ekiti State Government for giving the Fajuyi matriarch a state burial, an act which he described as a remembrance of the life and times of Adekule Fajuyi, appealed to government to set aside a day to celebrate the reflective life of the late hero.

He added that the late Fajuyi was not just a gallant soldier but a loving and loyal one whose life is a challenge to the nation at a time it is going through serious security challenges.

The n”digbo community was also well represented at the burial service as well as the reception that took place at the Adetiloye hall,  with different Igbo groups in full traditional attire singing and dancing in praise of the late Fajuyi’s heroic deed.