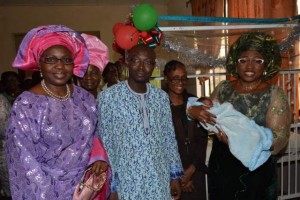 Wife of Ekiti State Governor, Erelu Bisi Fayemi, has presented cash and material gifts to the first baby and other babies born on the first day of Year 2014 in the state.

The first baby, a girl, was born at 12.41 a.m. by Ms. Deborah Adeleye at Ekiti State University Teaching Hospital (EKSUTH), Ado-Ekiti, and weighing 3.0kg at birth.

The Acting Chief Medical Director of the hospital, Dr. Kolawole Ogundipe, conducted the First Lady round the Maternity Ward during the visit.

Presenting gifts to the mothers, Erelu Fayemi prayed that the children would bring happiness and success to the families, adding that God would provide the resources needed by the parents to cater for them.

The governor’s wife reiterated the commitment of the present administration towards ensuring that more improvement was brought to the quality of lives of the people of the state.

She said that the baby was one of the beneficiaries of the Dr Kayode Fayemi-led administration’s free health scheme across the state, which had brought succor to a lot of people and family.

Fayemi added that one of the manifestations of the success of the scheme was the reduction in maternal and infant mortality within the state.

The mother of the first baby was showered with gifts by the governor’s wife, who later presented a birth certificate to the young woman.

Gifts were also presented to the mother of the second baby of the year, Mrs. Bukola Akinlolu, who was delivered of a baby boy at 5.07am, as well as Dr. Titilayo Adetoyinbo, who had her baby at 9.00am.

The benefitting mothers commended the governor’s wife for her support for women across the state, urging her to forge ahead with the good work.

On the entourage of the First Lady were the Commissioner for Women Affairs, Social Development and Gender Empowerment, Mrs Fola Richie-Adewusi; State Women Leader of the All Progressives Congress, Chief Funke Owoseni, and some women in politics.