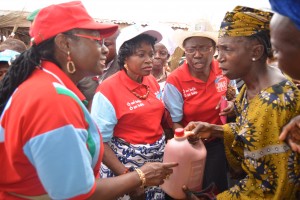 She said that the governor would defeat other candidates by a wide margin, as she leads the All Progressives Congress women campaign rally to Oye, Iye and Otun, in Oye, Ilejemeje and Moba Local Governments respectively, on Monday.

The women rally, which will take the governor’s wife and the campaign train to the 16 Local Governments of the state, is organised to rally support of women for the second term ambition of the governor.

During the campaign period, the first lady will also visit select markets across the state to patronize the traders in the second phase of her market outreach.

Impressed by the large turnout of women at each stop, the governor’s wife thanked them for their unflinching support and for reposing confidence in the ability of her husband to turn around the fortunes of the state.

Addressing party loyalists at Otun-Ekiti, she said that the rally became necessary to sensitise the women ahead of the election on the need to guard their voters’ cards jealously.

She warned the electorate to be wary of unscrupulous politicians who were allegedly on the prowl seeking to purchase voters cards and disenfranchise them.

Fayemi, who defied the downpour at Iye and Otun assured the people of adequate security during the election, while she advised them to stay by their votes up to the counting stage to forestall possible rigging or ballot box snatching.

She assured the women that the governor would not deviate from his renewed pact with them, stressing that better days were ahead of the women in the second term of the administration.

The governor’s wife urged the women to mobilise more people from the opposition parties to the APC to brighten the chances of the governor during the forthcoming poll.

She urged party faithful to work towards resounding victory for the governor in order to foreclose post-election petitions by the opposition.

She said, “This time around we should work towards recording landslide victory that will discourage anybody from filing petitions. I’m confident that we will win convincingly.

“So, if any opponent feels like still trying his luck at the tribunal, we will meet them there. But, with your support we will win this election by a wide margin. We will not be the one going to the tribunal this time.

“I’m therefore appealing to party members here to go from house to house and start campaigning about the achievements of Dr. Kayode Fayemi and the need for continuity in Ekiti.”

Fayemi used the opportunity to advise voters who have not collected their voters’ cards to do so immediately to enable them to vote during the election.

She reminded the women that Fayemi had fulfilled the promises he made to them in 2007 through enhanced free health package, gender mainstreaming and enactment of women-friendly laws, among others.

Fayemi, who said she was conscious of the hike in the prices of the commodities she purchased across the markets, said she was, nonetheless, happy that she was able to put smiles on the faces of the enthusiastic traders.

On the campaign train were the State APC Women Leader, Chief Funke Owoseni and other women party leaders; female commissioners and special advisers, as well as members of board and parastatals.