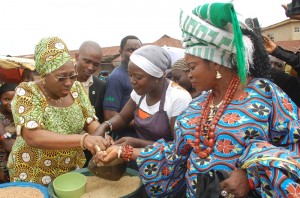 The market outreach programme initiated by the Wife of Ekiti State Governor, Erelu Bisi Fayemi, took off with presentation of brand new buses and cash grants to traders at Ido-Osi and Ijero local governments on Monday.

Scheduled to span the next three weeks across the state’s 16 local governments, the programme is a collaborative effort of the ministry of women affairs, social development and gender empowerment, local governments and the Ekiti Development Foundation (EDF).

The foundation is the brainchild of the wife of the governor.

Presenting a bus at each stop, she told the market women that the vehicle was part of the government’s intervention to ease the challenges confronting them.

Apart from cash grants and buses, each market also received plastic containers, standard measure and pouch with waistband for traders to keep their money during business hours.

The visits also witnessed health talk by an official of the state’s ministry of health, Mrs. Kemi Akinleye, as well as HIV/AID sensitization by a team from the State AIDS Control Agency, led by the Project Manager, Dr. Charles Doherty.

As an icing on the case, the governor’s wife boosted the economy of traders at the Oja Oba in Ido-Osi and Ijero where she bought off several commodities on display, on Monday.

Addressing the traders, Erelu Fayemi reiterated the resolve of the administration led by her husband, Dr. Kayode Fayemi, to continue to support women through empowerment and gender mainstreaming.

She added that the government would pay particular attention to the needs of market women in view of their role as pillars of the economy.

Since the administration came on board, she said it had listened to the needs and concerns of market women and addressed them.

The governor’s wife added that her office conducted a feasibility study to assess the various needs and challenges facing each market, which she said was being addressed by the state and LGs.

According to her, lack of potable water, poor sanitation, lack of access to transportation and non-availability of lock-up shops ranked high among the needs of the markets as revealed from the survey.

“I am pleased to inform you all that as I go about the state, we will ensure that all markets across the state will have virtually all their concerns addressed” She said.

Erelu Fayemi used the opportunity to solicit continued support of the women for the administration as it spread dividends of democracy across every sector of the economy.

The Commissioner for Women Affairs, Social Development and Gender Empowerment, Mrs. Fola Richie-Adewusi commended Erelu Bisi Fayemi for her support for women since the present administration came on board.

Having empowered several women groups during her visit to the local government areas last year, the commissioner said the governor’s wife decided to make market women the sole focus of her latest empowerment initiative.

In their remarks, the Caretaker Committee Chairmen of Ido-Osi and Ijero local governments, Messrs Kehinde Ogunlade and Bode Agbeleye respectively pledged to sustain their partnership with the state for the common good of the people.

On the entourage of the First Lady were commissioners, female lawmakers, wives of top government functionaries and women in politics.