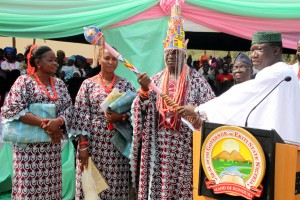 L-R: Wives of newly installed Monarch, Olori Grace and Magaret Oladele; Olupole of Ipole-Iloro, Oba Babatola Oladele, during the Presentation of Certificate and Staff of Office to the Oba, in Ipole-Iloro.

Ekiti State Governor, Dr Kayode Fayemi has restated that his administration will not meddle in the selection process of any traditional ruler in the State, but will religiously adhere to the tradition and custom of the people and the Chiefs Law of the State.

The Governor made this known while presenting the staff of office to the new Olupole of Ipole Iloro Ekiti, Oba Babatola Oladele on Saturday. The Governor said his administration will always respect the will of the people and the laws guiding the selection of traditional rulers in the State.

Governor Fayemi who recalled that the previous administration had attempted to fill the vacancy left by the demise of the late Olupole, Oba Owoseni Bright, who passed away in 2004 but failed due to the politicization of the process against the will of the people. He  stressed that the unnecessary delay could have been avoided if the last regime had been guided by sincerity of purpose in the selection process.

“Previous attempts by the last administration to fill the vacancy of Olupole after the passing away of the Oba was characterized by political subterfuge, intimidation and total disregard for the custom and tradition of Ipole Iloro Ekiti people. However, the people vehemently eisteddfod the threat and were resolute in their determination to follow due process in the selection of their new Oba”, Fayemisaid.

While congratulating the new monarch on his ascension to the throne, the Governor charged him not to shirk his responsibilities as the chief promoter of the ineterests of his people and also embrace everyone.

Fayemi urged him to seek the cooperation of his people for the rapid development of the community and shun political bickering, mudslinging and unwarranted lack of cooperation that can limit progress.

He highlighted the achievements of his administration, saying that these would have been impossible but for the support given by the people and the traditional rulers of each community.

In his acceptance speech, Oba Oladele assured that he would commit himself to the service of the people and work together with them to bring about the development of the community.

The monarch also thanked Fayemi for giving approval to his nomination and end the prolonged regency which had actually flouted the laws on the tenure of regency in the State.