#Ekiti2014, Features, NewsEkiti’s Search For A Role Model For Gov

Ekiti’s Search For A Role Model For Gov 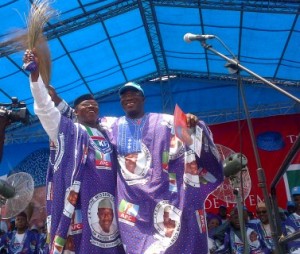 “Anybody that our children will not see as a role model, I will never endorse such a person. We don’t want a governor who will pass under the barbed wire (at an international airport).We can no longer afford a governor that people will be asking ‘what is wrong with them’ in Ekiti.”

A former governor of Ekiti State, Olusegun Oni, hit at the heart of the matter that is fast becoming the defining issue in the gubernatorial election scheduled for June 21 in Ekiti State.

Oni spoke at the endorsement rally in honour of Governor Kayode Fayemi in Ekiti State capital, Ado Ekiti. It was a succinct summary of a factor that has steadily got into the front burner of the campaigns in the state. He referred to the issue of character, integrity and honour of candidates in the election.

The frontline contenders for the office remain the incumbent, Kayode Fayemi, a former governor, Ayo Fayose, and member of the House of Representatives, Opeyemi Bamidele, with the race being a clearly two-horse race between Fayemi and Fayose.

It is not surprising that the issues about the candidates have become a major consideration in the campaigns. The Ekiti people have traditionally prided themselves as people who cherish integrity and honour.

This self-adulation has been strengthened by the emergence of the state with the largest concentration of university professors and icons of major professions like law that worship integrity and honour. Indeed, the motto of the state, ‘Ile iyi, ile eye’ (Land of Honour)’ captures this general perception of the Ekiti people.

The politics of Ekiti since the return to democratic rule in 1999 has also played around this perception. The period between 1999 and 2003 was one widely regarded as quiet years under former Governor Adeniyi Adebayo. Adebayo’s exit in 2003 ushered in the Peoples Democratic Party (PDP) years of Fayose.

It was a period that Ekiti strolled to the front pages of the media with reports of violence and brigandage. The PDP was reeked with crisis and as Fayose’s relationship with the then President Olusegun Obasanjo became strained, the local crisis in Ekiti snowballed into a national crisis.

In a spectacle that placed the state in a class of its own, Ekiti produced three governors within two weeks raising serious questions about the use of presidential powers of declaration of state of emergency, the powers of the House of Assembly to impeach a governor, the propriety of the anti-corruption agency, EFCC, playing the attack dog for politicians and the credibility of the state leadership.

As Fayose faced the onslaught of Nuhu Ribadu’s EFCC, another frontier of crisis was opened in the parliament embarked on his impeachment over sundry allegations.

On a quick trail of Fayose’s subsequent impeachment came the controversy of who was the succeeding governor between the deputy governor, Abiodun Olujimi (who was deemed to have been impeached with Fayose), or the Speaker of the House of Assembly (who constitutionally steps in the absence of governor and deputy governor).

Obasanjo was to expectedly intervene with the declaration of a state of emergency and the appointment of a fellow army general, Idowu Olurin, as the administrator of the state. It was a testy period for Ekiti. This, among others, was what Oni referred to when he narrowed the present gubernatorial contest to the search for a role model for the children of Ekiti.

This has given impetus to the candidacy of Fayemi. In three and a half years, Fayemi has run a government that is devoid of any controversy. In Fayose, the state was almost permanently in the news for the wrong reason. The first was on the name of the governor: Is he Fayose or Oluwayose?

There were also issues about his educational credentials; whether he attended the Polytechnic of Ibadan as he claimed or not? There were also squabbles in the Fayose family with the governor battling his siblings in the media about issues including where to bury his late father.

Then came the controversial N2.5billion poultry project through which Fayose said he wanted to turn Ekiti State to a major player in the national poultry business. The controversy generated many legendary tales of its own.

That was the beginning of the N2.5b poultry saga that culminated in the coming of the EFCC into the story, the impeachment of Fayose and the declaration of a state of emergency in Ekiti.

Contrarily, it has been a quiet period in Ekiti under Fayemi. Indeed, the governor has received endorsements of prominent indigenes of the state for the numerous projects of his government particularly in the areas of infrastructure development, social security, gender equality and development, youth empowerment, promotion of knowledge economy and the restoration of respect for Ekiti people.

As the countdown to the election begins, the issues of character, honour and integrity will continue to reverberate and the electorate will be reminded of the voting guide volunteered by former Governor Oni: Vote a candidate who is a role model to your child!

This article was first published in the Nigerian Tribune on May 28, 2014.