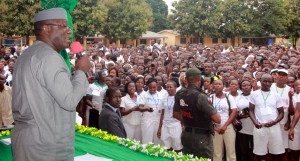 Ekiti State Governor, Dr Kayode Fayemi, addressing a cross section of Volunteers from the State's Job Creation and Employment Agency, during a visit to their camp, ahead of their graduation, in Ise-Ekiti.

Over 4,000 Ekiti youths who are currently participating in the Youth Volunteer Corps programme of the State Government  have pledged their support for the re-election of the State Governor, Dr Kayode Fayemi; saying that he deserves another term in order to complete his people-oriented programmes, especially his war against unemployment in the State.

The youths, who are undergoing a workshop at the NYSC Orientation camp in Ise-Orun-Emure -Ekiti  as part of programmes lined up to wrap up their 2-year volunteer service, trooped out and sang various commendation and solidarity songs to welcome Governor Fayemi who paid an unscheduled visit to the camp at about 2.30pm on Thursday.

It is recalled that 5,000 youths from the 16 local government areas of the State were employed into the Ekiti Youth Volunteer programme in June 2011 and have been receiving a monthly stipend of N10,000 each.

Some of the youths who spoke to journalists commended the Governor for his irrevocable commitment to banishing youth unemployment in the State through the scheme and other related schemes including the Youth Commercial Agriculture Development (YCAD) programme.

Miss Ade-Ojo Agnes, one of the volunteers lauded Fayemi’s volunteer initiative but pleaded that the Government reserve a certain quota of job opportunities for the volunteers during recruitment exercises into different sectors of the service of the State Government.

Addressing the volunteers, Governor Fayemi assured that the State Government would consider giving certain slots to the volunteers during recruitments into the civil and teaching service, even as he added that not everyone can be absorbed into the civil or teaching service but everyone can be gainfully employed given the plans lined up by his administration.

“We must continue to move Ekiti forward and you have a role to play. Of course I want you to support my re-election but I won’t take advantage of you for election purposes. All of us can be active in our societies without even going into politics. I want you to be active in your communities. You have the wherewithal to be useful to the society. I cannot accept that you won’t be useful. I believe you hold the key to our future. It is a future that you won’t be thugs for any politician or eat crumbs from their tables”, he said.

The Governor explained that the Youth Volunteer Scheme was set up to equip the youths with the knowledge they needed to become their “own employers”; saying that the government has invested so much in the programme.

He commended the youths commitment and hard work which he described as the elements needed to make Ekiti stand out; adding that youths who want to be independent will find something to do in the State as the State Government is setting up an Innovation  Fund to enable youths who want to be self-employed establish their businesses with ease.

With the Governor at the camp were the Commissioner for Labour, Productivity and Human Capital Development, Mr Oluwole Ariyo, his counterpart in the Trade, Investment and Innovation, Debo Ajayi and the Director-General of the State Job Creation and Employment Agency, Folorunso Aluko, among others.