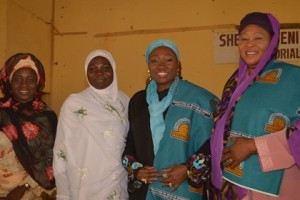 L-R: Wife of Special Adviser to Ekiti State Governor on Political Matters, Alhaja Fatimah Jinadu; President, Federation of Muslim Women's Association of Nigeria, Ekiti State chapter, Alhaja Fausat Yusuf; Wife of the Governor, Erelu Bisi Fayemi; and Wife of Secretary to the State Government, Mrs. Modupe Owolabi, during the endorsement of Governor Kayode Fayemi for second term and a prayer session for the governor's wife by the state chapter of FOMWAN, in Ado-Ekiti..

Muslim women in Ekiti State, under the aegis of the Federation of Muslim Women’s Association of Nigeria, have endorsed the Governor, Dr. Kayode Fayemi, for second term.

The endorsement took place at a prayer session for the governor and his Wife, Erelu Bisi Fayemi, which was held at Ola Oluwa Muslim Grammar School, Ado-Ekiti, on Sunday.

This was just as the first lady allayed the fears of citizens over the heavy security presence across the state, a development she said was meant to protect residents against attack by “desperate politicians” before, during and after the election.

Led by the State President (Amirah), Alhaja Fausat Ahmed-Yusuf, the women had converged on Ado-Ekiti, the state capital, from the 16 Local Government Areas of the state for the prayer session.

Addressing the gathering, Ahmed-Yusuf said that the Muslim women decided to throw their weight behind the governor to reciprocate his support and that of his wife for members of the association since 2010.

Apart from the governor’s religious tolerance that made it possible for Muslim female students to wear hijab to public schools, she said the governor had put in place several women-friendly legislations that have made life easier for Ekiti women.

The Muslim leader said this was the payback period for the warmth and love shown to FOMWAN by the governor’s wife as exemplified by her hosting women Muslims to iftar (breaking of fast) and presentation of gifts during Ramadan from 2010 to 2013.

Ahmed Yusuf said, “We thank the governor for the opportunity given to our female children to wear hijab to primary and secondary schools without molestation. He also built a beautiful mosque for the Odo Oro Muslim community in Irepodun/Ifelodun Local Government.

“This is a sign of religious tolerance.  We want to plead with him to consider the appointment of Muslim women into top position during his second term, which by the grace of God shall come to pass. We pray for him to realize his ambition. But, I urge you to obtain your voters card to make this possible.”

Besides, the Muslim leader said that Muslim women have benefitted from the several empowerment programmes and safety nets provided by the governor’s wife since her husband took over the mantle of leadership.

Appreciating the Muslim women leaders for the endorsement and prayers, the governor’s wife assured them that the governor has better plans for women in the next dispensation as enshrined in his renewed pact with Ekiti women.

Erelu Bisi Fayemi said, “I appreciate my Muslim sisters for this kind gesture and solidarity with Governor Kayode Fayemi. I can assure you that he will not let you down, because he has a special place for women.

“All we need to do as citizens is to continue to support him and ensure that we cast our vote for him on Saturday. If you put the leading candidates side by side you will know that my husband surpasses them on records of achievements and pedigree.

“As you move about, don’t be intimidated by the heavy security presence. They are not here to harm you, but to protect you against attack by desperate politicians. On the election day, ensure that you canst your vote for Dr. Fayemi and stay there till the votes are counted.