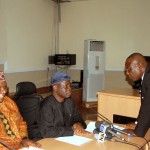 The Transition Committee put in place by the Ekiti State Government to organise the October 16th inauguration of the new administration in the state commenced work on Monday with its inaugural meeting.

The transition committee which is made up of some top functionaries of the incumbent administration and nominees of the Governor-elect, at the meeting, promised to work together harmoniously in the overall interest of Ekiti people.

The Chairman of the Committee and Secretary to the State Government (SSG), Alhaji (Dr) Ganiyu Owolabi,  inaugurated the committee on behalf of the state Governor, Dr Kayode Fayemi at the Executive Council Chambers of the Governor’s Office, Ado-Ekiti.

The Governor also gave an approval that the Chairman of the Governor-elect’s transition committee, Chief Dipo Anisulowo, be appointed co-chairman to ensure equity and fairness.
Anisulowo was represented at the inauguration by Mr. Owoseni Ajayi.

In his opening remarks, Owolabi said the committee is composed of members he described as “veterans” who had acquired wealth of experience through their service in government presently and in the past.

He promised the readiness of the committee to ensure a seamless transition of power expected to climax in the inauguration of the governor-elect on October 16.

According to Owolabi, the fusion of the nominees from both sides of the divide into a single committee will give opportunities to clarify issues where necessary rather than resort to falsehood.

He stressed that the Fayemi administration still has the mandate and legitimacy of the people of Ekiti State till October 15th, promising that actions will be taken only in the interest of the people.

Owolabi also disclosed that government officials superintending over the affairs of  ministries, departments and agencies of the government were made to prepare handover notes that will guide the committee in taking decisions.

He explained that the committee will break into sub-committees to bring various proposals to the table ahead of the inauguration.

Ajayi who spoke on behalf of Anisulowo expressed satisfaction with the relationship that exists between Fayemi and Fayose after the announcement of the June 21 election result.

He opined that the maturity displayed by the duo is to ensure that Ekiti people get the best.

He stated that the committee members are not oblivious of the facts that both sides had traded words in the media adding that the setting up of the committee now gives members opportunity to lay facts on the table.

Ajayi said people have no option than to resort to “rumour market” to source for information in a situation where facts are not available. He counselled that all actions and inactions of the committee members must be in accordance with the interest of Ekiti people.

The committee held its first meeting behind closed doors after its formal inauguration.