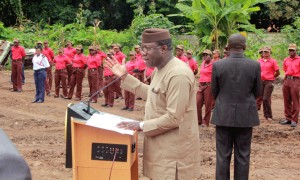 Ekiti State Governor, Dr Kayode Fayemi; addressing a cross-section of Fire Cadets and Paramedical Corps, during the opening ceremony of a 4 week Training Programme, in Ado-Ekiti.

Ekiti State Governor, Dr Kayode Fayemi has flagged off a 4-week training programme for 210 officers of the State Fire and Paramedics Services with the aim of equipping and acquainting them to contemporary tools as well as manpower development for efficient and effective emergency service delivery in the State.

Declaring the training open in Ado Ekiti on Monday, Governor Fayemi said attention is being paid to the development of manpower and facilities of the Fire and Paramedics services because of the place of the Emergency services in the “continuum of a Rapid Respond Squad cannot be taken over by any other agency of government”.

The Governor who reiterated the commitment of his administration to the safety of lives and property of citizens explained that this second training programme is to further expose all the officers to international best practice and modern approach to emergency responses even as the State Government requires professional personnel who could effectively man the newly procured emergency service equipment.

He assured that the State Government would leave no stone unturned in ensuring adequate safety of lives and property of citizens.

While appealing to citizens to be security conscious at all times and avoid creating hazardous situations which could lead to mishap, Dr. Fayemi charged that they should alert officers of the Fire and Paramedics Services for quick intervention whenever there is an emergency situation.

The Governor added that he had instructed that toll free emergency  service numbers which could be used anywhere across the State be provided  in order to fast-track the dissemination of information to the appropriate emergency service authorities; saying that the numbers would soon be communicated to the general public.

Fayemi who hinted that the newly built ambulance bays and fire service stations being renovated would be commissioned and put to effective use, expressed optimism that colossal loss of lives and property caused by disastrous occurrences would greatly reduce as trainees are expected to be equipped with the knowledge of how to respond to the complexities of emergency situations in a contemporary world.

In his remarks, the Commissioner for Special Duties, Mr Wole Adewumi commended Governor Fayemi for approving the training programme which is being handled by experts from United States of America; saying that it is timely as the State Government just procured five fire fighting engines, six sophisticated ambulances and three water tankers worth Three Hundred Million Naira for the use of the Fire and Paramedics services.

Adewumi who was represented by the Permanent Secretary in the Ministry, Mrs Adekunbi Obaisi added that the training will not only adequately prepare the officers for the challenges and technicalities involved in disaster management but also serve as a channel to sensitize the public on the commitment of the Fayemi-led administration towards public safety.