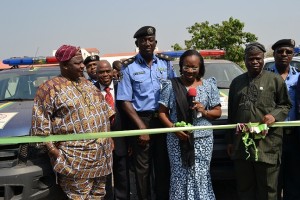 Nigerians were yesterday urged to join hands with security operatives in the war against terrorism and other crimes.
Ekiti State Deputy Governor, Prof Modupe Adelabu, who made the urge, said concerted efforts from all stakeholders and the cooperation of all are required for the security to surmount the challenges.

She spoke at the inauguration of 19 patrol vans donated by the administration of Governor Kayode Fayemi to the Nigeria Police Force through the Ekiti State Command.
State Police Commissioner Wakama Sontonye led other police officers to receive the vehicles, fitted with security gadgets and other furniture and tools including computers.

The deputy governor said the gesture was borne out of the need to assist the police in the area of surveillance and information gathering, particularly ahead of the governorship election billed for next year 2014 in the state.
Informing her audience that the state government was committing a lot of resources to assist the State Police Command in the area of logistics, Mrs. Adelabu said the gesture has been profitable as the state remained one of the most peaceful in the country.

According to her, officers of the Command have been up and doing in the discharge of their statutory duties. Commending the hierarchy of the Command for the security they have provided for lives and property in the state, the deputy governor urged them not to rest on their to rest on their oars but to be more proactive, particularly during this festive period.

She noted that the Command required vigilance to contain pockets of security challenges which might arise during the Yuletide.
Responding, Mr Sontonye lauded the government efforts to ensure the security of lives and property of the entire citizens and residents in the state.
He said the logistic supports for his Command have greatly assisted the force to effectively curtail criminal tendencies in the state.

Thanking the government for the new tools which he noted would further enhance the police operation, Mr. Wakama assured that his men will not abuse the government in the use of the vehicles.