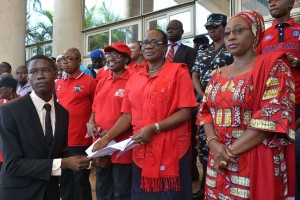 It was protest galore yesterday in Ado-Ekiti, the Ekiti State capital, as school  children and members of the local chapter of the National Association of Proprietors of Private Schools (NAPPS) in the state took to the streets in solidarity with the 237 pupils kidnapped from Government Girls’ Secondary Schhol, Chibok, Borno State by members of the dreaded Boko Haram insurgents.

The protest rallies, which took off at different points within the city terminated at the Governor’s Office, where they presented letters to Governor Kayode Fayemi en routePresident Goodluck Jonathan.
They condemned in strong terms the abduction of the school girls and demanded their immediate release.
The pupils, who trouped out in their thousands marched on the Governor’s Office, expressed disappointed that the annual Children’s Day celebration could not be marked yesterday owing to government’s failure  has to secure the release of their sisters, friend and colleagues, six weeks after they were abducted from their hostel in Chibok.
With red ribbons tied around their heads and wrists, they protesting pupils carried placards with various inscriptions such as: “Free our Sisters, Friends and Colleagues”; We say NO to Terrorism”; “We say NO to Violence”; “STOP Violence against Children”; Children are Future Leaders; and Treat US Well” among others.
The Speaker of the Ekiti State Children Parlierment, Ilesanmi Oluwaseun, who spoke for the children, said Ekiti children are worried that the girls were still in the custody of their captors more than a month after their abduction.
Ilesanmi pleaded, “Release our friends, release our sisters, give them the chance to live and achieve God’s purpose for their life. Oh God, our eyes are on you. Mr. President, do all you can to bring them back to us”.
He explained that children were unhappy that their sisters, friends and colleagues were still in the custody of Boko Haram, their abductors all these while and therefore call on the government at all tiers to rally efforts with the international body who have offered to assist Nigeria and secure the release of the girls without further delay.
“We want to see them safely in the comfort of their homes and custody of their parents again”, he concluded.
He later presented a letter, which he said was meant for the President to Governor Fayemi, who was represented by his deputy, Prof, Modupe Adelabu. The deputy governor was accompanied by the governor’s wife, Erelu Bisi Fayemi.
Responding to the pupils request, Prof. Adelabu said the governor and his cabinet were also unhappy about the incidence, even as she express the support of the State Executive Council to the children’s action to press home their demand for the quick rescue of the girls.
Her words: “The governor is worried about the plight of the children and everyday he has been making spirited efforts in his capacity as the governor and an international figure to ensure that the girls regain freedom”.
She assure them that the state government will continue to support every move that will lead to quick release of the girls and that soonest, the girls will be recued and handed over to their parents hale and hearty.
Mrs. Adelabu, who also urged pupils to commit the plight of the girls to God in prayer, advised them the to be more security conscious by being vigilant and observant of their environment at all times and report anything strange or suspicious to their parents or security agents immediately.
Also addressing the children, the wife of the governor expressed her unhappiness that May 27, a day set aside to celebrate children has turned to a day  of lamentation on the plight of the Nigerian child.
According to her, all women will mobilise and do whatever in their capacity to ensure that the girls regain their freedom soonest so that the Children’s Day will be celebrated with thanksgiving.
Also yesterday, proprietors of private schools under the (NAPPS) umbrella body, lent their voice to the call on President Goodluck Jonathan to step up action for the rescue of over 200 school girls kinapped by the Boko Haram sect in Bornu State.
They support was contained in a protest letter they submitted at  the Office of the Deputy Governor, Ado-Ekiti. They were received by Mr. Ayo Adegbite, the Deputy Chief of Staff (DCOS) to the deputy governor.
The proprietors came with different banners such as: “NAPPS says NO to Terrorism”; “Our girls must be rescued”; and “Terrorism is evil” among others.
President of the union, Mr. Adaramewa Ijatuyi, said something must be done urgently by the Federal Government to rescue the girls in order for Nigerians to have confidence in the country.
He warned that Nigerians might be returne to the dark ages when girls were dicouraged from acquring formal education if something reasonable is not done to remedy the situation.
Mr Adegbite, who also condemned the abduction of the pupils, promised to deliver the NAPPS’  letter to the appropriate quarter.