Making good its promise to grant housing and car loans to teachers in its primary schools, the Ekiti State government has inaugurated a nine-member committee to implement the Ekiti State Primary Schools Staff Vehicle Loans/Advances scheme.
Already, a take-off grant of N210 million has been approved by the government for the implementation of the scheme. The amount will be raised through tripartite arrangement in which the state will source N50 million and each of the 16 local government areas contributing N10 million. 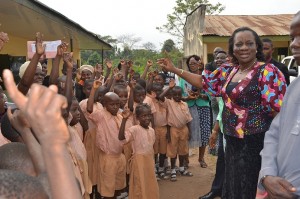 Besides, the Ekiti State Universal Basic Education Board (SUBEB) is to release N30 million from its welfare fund to supplement the government effort.
Chaired by Deputy Governor Prof Modupe Adelabu, who doubles as the Chairman of SUBEB, the Staff Vehicle Loans/Advances Committee has the
permanent secretaries of SUBEB, the Ministries of Local Government and Education, Science & Technology, the local chapter chairman of the Nigerian Union of Teachers (NUT) as well representatives of relevant stakeholders as members.

Inaugurating the panel on behalf of Governor Kayode Fayemi at the SUBEB headquarters in Ado-Ekiti, Prof Adelabu described the event as epoch making and a major leap to boost the morale of primary school teachers for improved productivity.

According to her, yesterday’s inauguration came in response to a recent directive by the governor that a committee be put in place to work out the modalities for the immediate disbursement of the vehicle and housing  loans/advances to teachers in public primary schools.

The State House of Assembly had earlier passed into Law in 2011an enabling bill for the establishment of the panel. Pointing out that Ekiti State is the first to begin the implementation of the Loans/Advances Scheme in the Southwest geopolitical zone, the deputy governor described the inauguration as another feather to the cap of Governor Fayemi, who has scored many firsts in the course of its three-year administration.

Prof. Adelabu charged the committee members for the opportunity they have at contributing their quota to education development in that capacity and urged them to work assiduously and make the programme a success.