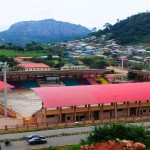 Activities marking the fourth anniversary of the Dr Kayode Fayemi administration continue on Wednesday, October 1, 2014 with the official commissioning of the 12,000 seater  Ekiti Parapo Square in Ado-Ekiti.

The square which is one of the legacy projects of the Fayemi administration would be commissioned by former Head of State, General Mohammod Buhari, supported by other eminent Nigerians.

According to a statement by the media committee of the fourth anniversary, the 2014 edition of the State Merit Award would hold at the arena shortly after the commissioning.