Featured, NewsEkiti Must Not Relapse Into Anarchy, Fayemi Tells Electorate

Ekiti Must Not Relapse Into Anarchy, Fayemi Tells Electorate 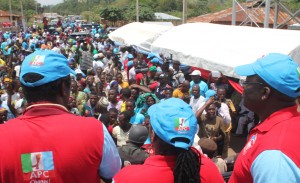 Ekiti State Governor and candidate of the All Progressives Congress (APC), Dr Kayode Fayemi on Wednesday commenced campaign for his re-election in  the June 21 governorship election with rallies in towns and communities in Oye Local Government Area of the state.

The Governor who started the campaign at Ilemeso got royal blessings from the Onisan of Isan Ekiti, Oba Sunday Ajiboye who prayed God to grant Fayemi victory in the election so that he can continue his God-sent mission for the development of the State.

Fayemi was joined on the campaign by his deputy, Prof. Modupe Adelabu; his wife, Bisi; interim chairman of APC, Chief Olajide Awe, Secretary to the State Government, Dr. Ganiyu Owolabi and members of the state house of assembly and state executive council.

Fayemi, while urging the people to vote for him so that the good works could continue, reminded the people of the state of insecurity that was experienced in the State between 2003 and 2010, urging them not to allow the state return to anarchy.

He asserted that the State was given negative reportage in the national dailies as a state of “one week, one trouble”, stressing that peace returned to the state when he assumed office in October 2010.

The Governor who recalled how royalty was desecrated between 2003 and 2006 as some monarchs in the State were physically assaulted while some others were threatened with removal, explained how they are now being well treated with respect under the present administration.

Dr Fayemi added that the state of anarchy during the era was characterized by instability as Deputies, Chief Judge and Speakers were changed thrice within the space of three and a half years, while some innocent citizens were also killed.

He stated that the best way to sustain the peaceful atmosphere being enjoyed now in the State is for the people to vote en masse for continuity by supporting and voting for the All Progressives Congress (APC) on June 21.

Also speaking at the campaign, a former Deputy Speaker in the first Assembly, Hon. Karounwi Oladapo said the State cannot afford to allow the State relapse into the ugly past under the Peoples Democratic Party.

He said: “When Otunba Adebayo was governor, it was one Deputy, one speaker and one Chief Judge. During the Fayose era, it was three Deputies, three speakers, three Chief Judges. During this period of anarchy, there was no development because development only thrives where there is peace. Are we at the same point with the rest of the world and States now? The first governor was a lawyer, the present governor is a Ph.d holder and we cannot even afford to replace him with someone whose HND is controversial.”

The Director-General of the Fayemi Campaign Organization, Hon Bimbo Daramola said his candidate, Dr Fayemi, has already sold himself as a good product which does not need to be oversold because people will naturally demand for him.

The congressman restated that the campaign will be issue-driven even as traditional rulers in each of the community visited had thanked the Governor for successfully carrying out at least five projects in their domains within the last three years, saying that this is an indication of what will happen in June.
Daramola said a man cannot be judged without his reputation and Fayemi has a reputation and antecedent that would take any other candidate four years to match up with.
Traditional rulers of each community visited had commended Fayemi for spreading development across all parts of the State without marginalizing any.

The Obadu of Ilemeso Ekiti, Oba Adegboyega Oyewumi said the governor has successfully done 8 projects including the completion of rural electrification, sinking of bore hole and community markets among others.

The monarch said these strides are not unconnected to the reasons why the people have trooped out en mass to welcome the APC guber aspirant.

The Onitaji of Itaji and chairman of Council of Traditional Rulers in the State, Oba Adamo Babalola thanked Fayemi for restoring the dignity of traditional rulers in the State, saying that the days are gone when monarchs are like toys in the hands a governor who did not accord them respect.

Oba Babalola who prayed for the Governor said though traditional rulers are non partisan, they however know what is right and will stand by such without minding whose ox is gored.

Meanwhile a PDP stalwart in Ayede Ekiti, Mr Maxwell Bamisile had during the campaign, led hundreds other members of the opposition party to defect to the APC.

Bamisile said his decision to join the APC was borne out of his acknowledgement of  the Governor’s feats in transforming the lives of the people.

Bamisile stated that the PDP compounded the problems in the party by handing over its governorship flag to “a candidate of questionable character” whom he accused of wreaking havoc in Ayede during his days in power.

He said the PDP and its allied parties should forget any plan to rig election in Ayede and other adjoining communities saying “they are going to meet heir Waterloo on the day of election”.

A former LP women leader, Mrs.  Fayemi who led other women to the APC, said they are impressed by what Fayemi has done in the last three and half years.

She said Fayemi will win the governorship election on the strength of his performance.