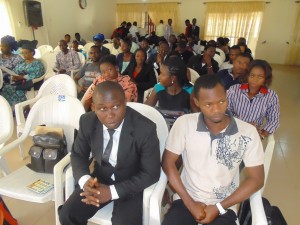 A cross session of the bursary award beneficiaries.

In apparent demonstration of its commitment to education and human development, the Ekiti State Government yesterday disbursed N19.2million to 131 indigenes of the state who recently graduated from the Nigerian Law School.

Presenting the cheques to the beneficiaries in Ado Ekiti through the State Scholarship Board, Governor Kayode Fayemi said the bursary will
alleviate the financial burden of beneficiaries in view of their huge financial responsibilities in the academic pursuit at the law school.

The Governor, who was represented by the state Commissioner for Education, Science and Technology at the flag-off of the payment of the bursary, expressed satisfaction with the level of success recorded in the effort to revamp the hitherto moribund education sector.

Dr. Fayemi noted that the encouragement given to students through healthy academic competitions as well as award of scholarships and bursary has assisted in revamping the sector which he said has almost lost its glories before his administration took the saddle in 2010.

Congratulating the recipients on the successful completion of their law programme, the governor advised them to use the money judiciously.
In his remarks, the Chairman of the state Scholarship board, Chief Deji Adegbite lauded the governor for the concerted efforts of his administration to revamp the state of education in the Fountain of Knowledge State.

Chief Adegbite explained that the awardwas strictly on merit, adding that it was open to all bona fide indigenes of the state in tertiary
institutions. He called on philanthropists, corporate organisations and other well- meaning Ekiti indigenes to compliment governments efforts by making financial contribution to Ekiti State Scholarship Scheme for the upliftment of education in the state.

Speaking on behalf of the beneficiaries, Biodun Adeyanju, a lawyer, expressed appreciation to the state government for its efforts at alleviating the sufferings of the people particularly the youths and students.
Two parents of beneficiaries, Mr. Richard Apata and Mr. Wole Ayegbusi also thanked the state government for the gesture and urged all to support the Fayemi-led administration.