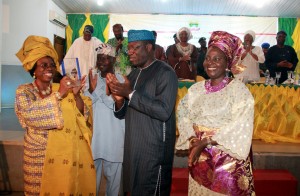 The 12 others include 17-year old Olayemi Ajayi who is to represent Nigeria in Denmark at next year’s Robotic Space Competition; Joshua Olamiju who had the best result in the last WASSCE in the State with nine distinctions, radio presenter, Chief Akinlade Ojo also known as Erugale; late Chief Ojo Ajibola; an indigenous interior decorator, late Chief James Kolawole; former Scribe of the Yoruba Council of Elders (YCE), Dr Kunle Olajide; former President of the All –Nigerian Conference of  Principals of Secondary Schools (ANCOPPS)Elder Enoch Dare and a renowned medical practitioner, Dr Sanya Olurotimi.

Others are retired Anglican Bishop of Lagos West, Revd. Peter Adebiyi; Elder statesman and reputed Banker, Chief Bandele Falegan; Business mogul, Chief Daniel Okoli and   Presenter and Custodian of Ekiti dialect, Mrs Christian Ademulegun. The Government Science College Emure- Ekiti was the best school in the last WASSCE and Christ’s School Ado Ekiti bagged the most improved school with an improvement in the SSCE result from 9% in 2012 to 99.9% in 2013.

Speaking at the event, the State Governor, Dr. Kayode Fayemi said Ekiti people are honourable  men and women, adding that it was time conscious efforts were made to project this positive image everywhere.

The Governor said that Ekiti people can only redeem the lost heritage by acknowledging that they have drifted a long way from who they were, while embracing new practices that are alien to the Ekiti values.

Fayemi stressed that the State Merit award was institutionalize not just to celebrate the high achieving Ekiti indigenes but also as one of the means of restoring the the primacy of values in the society.

He said: “It is sad indeed to observe the sharp decline that our once highly revered culture and tradition has suffered in recent times. Our psyche has been so badly damaged by decades of misrule and the monetization of our values system with our youth being most affected. It is on this note that as one of the means of restoring the primacy of values in our society, we decided to institutionalize this Annual Awards”, he said.

The governor added that the initiative retains relevance as one of the platforms for advancing the quest to rebuild a wholesome society upon the pristine values that define Ekiti people.

Dr Fayemi asserted that the awardees have done the state proud in their respective fields despite the moral decay which now characterizes the society; adding that the event would encourage upcoming generation to work relentlessly to propagate the good name of the State and project her image.

While congratulating the awardees, the Governor commended Chief Okoli, a non indigenes who got the award for making Ekiti his home, emphasizing that Ekiti has become home to countless non indigenes who in the spirit of federalism have the same rights and privileges and have added to the vibrancy and cosmopolitan outlook of the State.

In his remarks, the Commissioner for Special Duties and chairman of the Award committee, Chief Apalara Wole- Adewumi explained that the Committee carried out adequate publicity for the nomination of the awardees and got 60 recommendations but pruned down the list to 27 which was forwarded to the Governor for approval.

The 16 finalists, according to Adewumi, were drawn from different walks of life including academics/scholarship, research, profession, philanthropy, commerce, trade and industries, culture, arts and tradition, Youth, sports/music and entertainment, governance and community development.

Speaking on behalf the recipients, Prof. Funke Egunjobi said though some of them had received many awards, the Ekiti State Merit award supersedes all and it is an affirmation that “prophets can have honour in their towns”.

Egunjobi commended the Fayemi-led administration for searching thoroughly and identified the recipients to encourage them as well as upcoming generation to make excellence their watchwords.

She assured that they would not let the State down but live as true ambassadors.

The two youngsters –  Olayemi Ajayi and Joshua Olamiju were the cynosure of all eyes at the colourful event that held at the Jibowu Hall, Government House and graced by traditional rulers and top government officials and opinion leaders in the state.

Governor Fayemi urged the duo of Prof Egunjobi and Prof Falusi to mentor the youngsters so that they can become household names in their chosen fields as well.