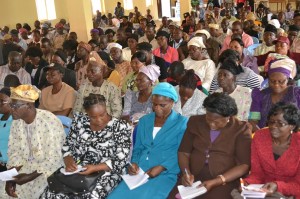 A cross section of head teachers at the Interactive Workshop.

Head teachers of public primary schools in Ekiti State have gotten a pat on their back for being articulate and competent in the discharge of their responsibilities.

They are knowledgeable enough in their chosen profession to match their colleagues anywhere in the world, Ekiti State Deputy Governor, Prof Modupe Adelabu, has said.

Prof Adedibu, who doubles as the chairman of the State Universal Basic Education Board, (SUBEB), made the remark in Oye-Ekiti during an interactive workshop organized for the head teachers in the state.

She spoke of plans by the Governor Kayode Fayemi administration to send the teachers abroad to sharpen their teaching skills.
According to her, the government decided to fund the workshop after it found out that the head teachers were being exempted from most of the trainings and workshops organised by the Universal Basic Education Commission (UBEC) in collaboration with SUBEB for teachers in public primary schools.
Commending the heads teachers for their effectiveness and leadership style which was evident in the good performances of the primary schools teachers in the state in the past two years, Mrs. Adelabu assured them government’s commitment to accord their welfare the necessary priority.

Her words: “The government will continue to pay your salaries and leave bonuses as and when due while other benefits such as car and housing loans, in – service trainings and overseas trainings will be designed in such a way that no one is left out.”