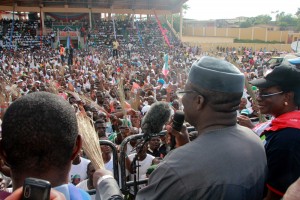 The Nigeria Labour Congress (NLC) on Saturday endorsed  the re-election bid of Ekiti State Governor and candidate of the All Progressives Congress (APC) Dr Kayode Fayemi ahead of the June 21 governorship election in the state.

The NLC President, Comrade Abdulwaheed Omar, leading a delegation of the union’s Central Working Committee (CWC) and several leaders of affiliate unions on a visit to the governor in Ado- Ekiti however asked stakeholders, including the Federal Government and the Independent National Electoral Commission (INEC) to ensure that the Saturday election is fair and credible.

Omar said Governor Fayemi has “performed creditably well and deserving of a second term as governor of the state.”, adding “We hope that the governor  will invite us for a tea party after June 21 election, by the special Grace of God.”

The NLC President said Fayemi’s struggle in the labour movement is well known, adding that his excellent performance as Governor of Ekiti State in the last three and a half years did not come as a surprise to the union, hence the need support his second term bid.

“Your Excellency, if we choose to identify openly with you, we have very strong reasons to do so”, declared Omar, who hailed Fayemi for the peaceful atmosphere that pervade the state, the developmental strides of his administration and the attention paid to welfare of workers.

The NLC President also said that the union leadership had been under intense pressure from external bodies not to endorse Fayemi. He however added that the union refused to bow to the pressure, convinced that it was doing the right thing.

He said: “Ekiti is capable of not taking dictation from any quarters. They (the people) are going to do justice to the election. We are surprised by a lot of attention regarding our coming here to hold our routine meeting. We don’t see any reason why anyone will interfere with that. Our consolation is that whether or not an election is going to take place, we know and can always identify with people who have identified with the movement.

“We are Nigerians coming to hold our meeting and no one can harass us. Your (referring to Fayemi) antecedent in labour movement is not something people don’t know and so we have every cause to be here to identify with you.

“During the June 12 struggles, was Fayemi not a part of that struggle and challenge? Our people also moved round the capital yesterday and did not see any sign of violence or destruction. We don’t shy away from the truth.

“We believe the election will be free and non violent if the powers that be will allow the people to freely make their choice. And no one will like to go backward after having gone this far regarding development in the state.”

Omar warned those he called ‘external forces’ against meddling in the June 21 election, noting the electorate must be free to make their choice during the poll.

Gov. Fayemi hailed the delegation for the sentiments expressed about his administration and the state. He promised to continue to meet the yearnings and aspirations of his constituency including labour.

He described the NLC endorsement of his candidature as a challenge to do more for the state and the people.

“My partisanship in the present political dispensation is a product of my past as student and pro-democracy activist. I promise that I won’t disappoint this constituency with my conduct in governance,” he said.

On fears about alleged plot to rig the election, Fayemi said: “the worst way you can incur the wrath of the people here is to wage war of rigging against them because Ekiti people will resist such. We are appealing to the labour leaders to continue to canvass one man, one vote so that whoever wins or loses can accept the outcome of the election.”

Meanwhile, the state chapters of the NLC and the Trade Union Congress (TUC) have also thrown their support behind Governor Fayemi’s re-election bid.

The NLC and the TUC led by their chairmen, Comrade Ayodeji Aluko  and Comrade Kolawole Olaiya respectively held  an endorsement rally for Fayemi at the Oluyemi Kayode Stadium in the state capital with  thousands of civil and public servants  in attendance.

The labour leaders pledged that workers in Ekiti would continue to identify with leaders who perform well in office to sustain the confidence the populace reposed in them.

The workers who staged a big rally at the Oluyemi Kayode Stadium in Ado-Ekiti said they are pitching their tent with the All Progressives Congress (APC) standard bearer because they have never had it so good in the history of the state.

Omar who was represented at the Ekiti workers’ rally by the former NLC President, Comrade Hassan Sunmonu and his team could not attend the rally on account of the Central Working Committee (CWC) meeting holding same day in Abuja.

All the workers’ unions in the state under the auspices of the Nigeria Labour Congress (NLC) and the Trade Union Congress (TUC) said the state had witnessed unprecedented development which they would want to continue beyond 2014.

All affiliate unions, workers in the informal sector and members of the Ekiti Volunteer Corps attended the rally.

Led by the state NLC Chairman, Comrade Ayodeji Aluko and his TUC counterpart, Mr. Kolawole Olaiya, the workers urged Ekiti people to re-elect Fayemi saying the various policies executed by Fayemi has improved the standard of living of workers and the entire people of the state.

The thousands of workers who defied the scorching sun turned the stadium into a huge carnival where they danced, sang and cheered endlessly as the Governor made his way to the stadium shortly after arriving from the national convention of his party in Abuja.

Omar who spoke through Sunmonu urged  the people of the state to keep faith with Fayemi by re-electing him for another term in office for the development being witnessed in the state to continue.

The Ekiti TUC boss Olaiya who spoke on behalf of all labour unions in the state noted that workers have had no cause to embark on any protest or industrial action before they got what was due to them.

He stressed that a vote for Fayemi next Saturday is a vote for the future of Ekiti State and the generations yet unborn.

The labour leader said prompt payment of workers’ salaries, provision of buses to ease their transportation problems, social security for the elderly citizens, payment of pension from time to time, provision of good roads, water, electricity, housing, youth empowerment and security of lives and property are among the reasons why they are supporting Fayemi for second term in office.

Olaiya said: “I can say without mincing words that workers have not engaged in any form of industrial action or protest to realize their demands and we want to appreciate God for the wisdom given to Governor Fayemi to perform all these laudable policies and projects.

“It is in recognition of this unique achievement in the state that earned Governor Fayemi the Best Governor of the Year in 2012. A vote for Fayemi is a vote for the future of our dear state and the generations yet unborn”.

Quoting copiously from the relevant sections of the Constitution of the Federal Republic of Nigeria, Olaiya who is a lawyer stressed that the primary purpose of a government is for the well being, security of lives and property of the citizens which he said Fayemi has faithfully implemented.

He explained that workers in the state have resolved to vote massively for the APC candidate and urged all the people of the state to do same for the unprecedented development to continue unabated.

Sunmonu said the achievements recorded by Fayemi in the last three and half years have been acknowledged within and outside the country urging voters in the state to use their votes to ensure continuity if what they have been enjoying in the state.

The veteran labour leader who served as the pioneer NLC President between 1978 and 1984 said he had known Fayemi for over 20 years saying the governor had always made himself available for the service of the common man as an activist and human rights campaigner.

Sunmonu said: “On behalf of Nigerian workers and on behalf of myself I came here to appeal to you Ekiti people. I have known your governor for over 20 years now, he is my younger brother and he is my friend.

“I spent 16 years as the Secretary General of African Workers Union in Ghana and we spent 10 of those years together when his wife was president of an international NGO based in Ghana.

“I urge you to vote for him for a second term in office for all these good things you are seeing in your state in the last three and half years to continue”.

Addressing the rally, Fayemi who was accompanied by his deputy, Prof. Modupe Adelabu and other top government officials said his administration had made the workers happy hence their resolve to back him for another term in office.

Fayemi said: “I am glad that earlier today, the NLC President had done an endorsement ceremony (for me) saying from available evidence from the workers and their representatives on ground in Ekiti State, no government has served the interest of workers as the current government has done.

“Those are not my words, they are the words of Comrade Abdulwaheed Onar and when you hear the state NLC Chairman and TUC Chairman lining up to say what they have said they are echoing the message given by Omar.

The APC candidate said he is banking on the work he had done and the support of the people to win the June 21 election and urged voters not to be intimidated by presence of soldiers and policemen on he election day whom he said are coming to protect them.

“Nobody will intimidate us, no external person will come to vote here. Those that are coming to foment trouble here will meet their Waterloo. It is only those eligible to vote here that will have the opportunity to vote.