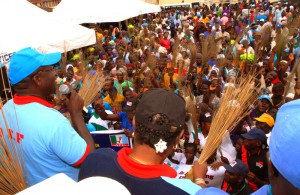 Ekiti State Governor, Dr Kayode Fayemi has said that the forthcoming governorship election is a referendum on his performance as governor in the State in the last 42 months.

The Governor said this in Odo Owa Ekiti  when the campaign train for his re-election hit Ijero local government.

Governor Fayemi who stated that his administration has confidently provided quality service to the people of the State, asserted that there is no community in the State which has not benefited from the projects and programmes of his government.

He added that he has constructed intra city and inter-township roads in virtually all communities in the State even as the 5km roads dot all the State and the State now has the best road network in the country.

The Governor who stated that his performances have given him an edge over his opponents stressed that he is running on records and he is not afraid to go to the communities which have benefited from the projects and solicit their votes for re-election.

Governor Fayemi said: “In all the communities we have visited, you can count one, two, three projects that we have done. In this community, if you go out there, you will see the road that we constructed for them between Odo Owa and oke ila in  Osun state. If you leave here, you will see the palace. You know the support I have given the Millennium church. We are visiting the communities to connect ourselves with what’s happening there. We are connected to each community. This is about service to the people.

“ We are not  afraid to visit a community because we have done things there and I have an advantage. I have said it several times. I am campaigning on my record. This election is a referendum on my performance as governor in this state. So, if I have not done it, I will not be able to say, look at it. Go down there and ask them who built this road, the school renovation, palaces that we have renovated, the peace corps we have recruited, the youth volunteers. That’s governance. Governance is about people, not about promises, not about gargantuan claim that are not founded on realities. What I am saying is tangible and independently verifiable”, Fayemi said.

Meanwhile Governor Fayemi has assured that all recently awarded and ongoing road projects in the council area will be completed.

The Governor who was received by a mammoth crowd in Iroko, Ayegunle, Oke Oro, Ijero, Iloro , Ara, Ikoro, and Araromi Ekiti among others said he is committed to providing good road network for the people of the State because they deserve the dividends of democracy for which he was elected to deliver.

Dr Fayemi promised that construction work would soon commence on the reconstruction of Ara-Épé-Araromi road, Iroko-Épé road, Ayegunle-Temidire-Ijurin- Iloro road and other roads in the axis.

He said that if his government would not do the roads, he would tell the people because his words are his bond.

Fayemi stressed that the ongoing asphalting of Ilukuno-Oke Oro road is a pointer that the present administration will make good his promise to complete all ongoing roads.

Some of the community members who spoke to journalists commended the governor for providing basic infrastructure for their communities to thrive.

In Iloro, Mr Dayo Olatunde a community leader said the Fayemi-led government had also restored pipe borne water to the community after more than 5 years that it stopped flowing.

He added that the reconstruction of Ayetoro-Ijero road and Ijero-Ido road by the Fayemi-led government has eased off transportation problem in the area.